Mohua population gets a boost in the Eglinton valley

Mohua/yellowhead in Fiordland's Eglinton valley received a top up yesterday with the release of 80 birds transferred from Anchor Island in Dusky Sound. 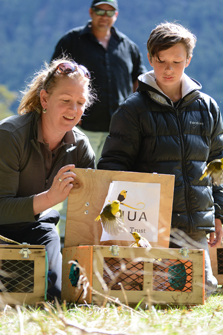 Mohua/yellowhead in the Eglinton valley, Fiordland received a top up yesterday with the release of 80 birds transferred from Anchor Island in Dusky Sound.

The Mohua Charitable Trust supported the transfer, working in partnership with DOC and Ōraka Aparima Rūnanga.

Lindsay Wilson, DOC Principal Ranger, said that in the early 2000s there were just 18 mohua left in the Eglinton valley area.

“Mohua would once have numbered in the hundreds but plummeted due to stoat and rat predation.”

In 2010, 69 mohua were moved from Chalky Island to the Eglinton valley in an effort to re-establish the species. Of these 34 birds stayed and settled in the valley, with 62 chicks fledging that year. Since then the population has remained relatively stable, with the survival of young birds staying high (74- 81%).

“The Mohua Charitable Trust sponsored the first mohua translocation to the Eglinton valley in 2010. We are thrilled to be following this in 2015 with a population top-up.”

Intensive pest management in the Eglinton valley – a combination of traps, bait stations, and last year, aerial 1080 – has allowed the area to become a mainland stronghold for a variety of endangered native species including mohua, long and short-tailed bats, kākā and kākāriki.

The Eglinton valley is one of the few road-accessible valleys in Fiordland National Park, and is a popular stop-off point for visitors to Milford Sound.

Mohua are particularly vulnerable to predation from rats and stoats because they tend to nest in holes and cavities in trees, making it difficult to escape if a predator visits the nest. Several rats have been recorded by video cameras eating eggs and adult mohua on the nest during the large pest plague in 2005.

Mohua were once widespread across the South Island, but their numbers have dwindled on the mainland due to predation from introduced animals and habitat loss. Secure populations of mohua exist on a number of predator free islands now, allowing reintroductions to take place back to protected mainland sites.

The Anchor Island mohua population were translocated from Breaksea Island in 2003. Since then this island population has grown, and is thought to be at or near carrying capacity.

The yellowhead/mohua is a small, insect eating bird which lives only in the forests of New Zealand's South Island and Stewart Island.