A man has been convicted over the shooting of a rare and protected black-billed gull/tarāpuka.

The conviction over the shooting of a black-billed gull/tarāpuka highlights some people don’t realise the birds are rare and protected, the DOC’s operations manager in Invercargill, Ros Cole, said.

Darren Leslie Baucke, 33, employed of Mossburn, was found guilty in the Invercargill District Court on one charge of hunting or killing absolutely protected wildlife without lawful authority in November 2014. The charge laid under the Wildlife Act carries a maximum penalty of 2 years jail or a maximum fine of $100,000. 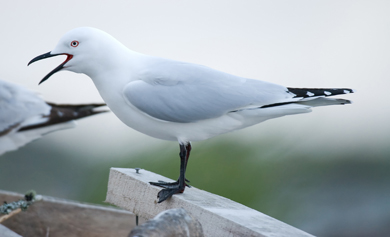 Two University of Otago Masters students studying black-fronted terns in the Oreti River, near a black-billed gull colony last November, heard gun shots fired and saw gulls from the colony fly into the sky in a massed panic flight. The students heard Mr Baucke fire his shotgun and saw a gull fall from the panic flight out of the sky.

Knowing that black-billed gulls are protected, the students contacted the police. Judge Bernadette Farnan held the student’s evidence was credible and compelling. Based on this evidence, the Judge found it proved Baucke’s actions had caused the death of protected wildlife.

Judge Farnan accepted Baucke did not know black-billed gulls are protected, let alone they are endangered. However, the Judge was satisfied he had not taken all reasonable steps to avoid the gull’s death. Baucke was convicted on the charge, fined $950 and ordered to pay witness expenses of $100.

“These birds are critically endangered and their numbers are rapidly declining. This type of behaviour is not acceptable. We encourage people to respect our native wildlife and give them the space they need. These birds are found nowhere else in the world and are part of what makes us unique,” Ms Cole said.

"We’re very grateful to the evidence provided by the two people who witnessed this incident and were prepared to come to court. We rely on the public to report incidents like this to the department as soon as possible, so we can determine the cause and hopefully prevent further incidences like this happening," said Ms Cole.

Anyone who sees the harming of native wildlife is encouraged to report it to the DOC hotline 0800 362 468.

Of New Zealand’s three species of seagull, the black-billed gull is the only endemic gull and is the most threatened gull species in the world. Numbers of black-billed gulls in Southland, the national stronghold, are rapidly declining. In 1974, there were 84,900 gulls breeding along the Oreti River. In 1997, this number had dropped to 15,308. Three-quarters of the black-billed gulls’ nesting habitat is on the major Southland riverbeds of the Mataura, Oreti, Aparima and Waiau Rivers.

The gulls nest in tight, dense colonies and when a colony is disturbed or threatened, all adult birds take to the sky, circling above the colony in a massed panic flight until the threat goes.

Black-billed gulls are less likely to be found in towns and cities than other gulls and are not usually seen scavenging for food.

They have long, thin black beaks that are easily distinguished from the shorter and stouter bright red beak of the red-billed gull.

They are a similar size to red-billed gulls, but have pale wings and a thin black border on the wingtips rather than grey wings with more extensive black wingtips.

In 2013, a man was jailed on a similar charge after driving his car through a black-billed gull colony in the Ashburton River, likely killed adult birds and chicks. In June this year, a prison inmate pleaded guilty to attacking a red-billed gull in the Invercargill Prison yard and was sentenced to 150 hours community work and ordered to pay $500 investigation costs.