Little spotted kiwi/ kiwipukupuku are today being returned to Dusky Sound in Fiordland for the first time in more than a century thanks to the support of the Fiordland Lobster Company.

Little spotted kiwi/ kiwipukupuku are today being returned to Dusky Sound in Fiordland for the first time in more than a century thanks to the support of the Fiordland Lobster Company.

Twenty birds are being transferred from Kapiti Island north of Wellington to predator-free Anchor Island/Pukenui in Dusky Sound to start another population of this endangered kiwi.  Originally from the South Island, little spotted kiwi were present in Dusky Sound up until the late 1800s. 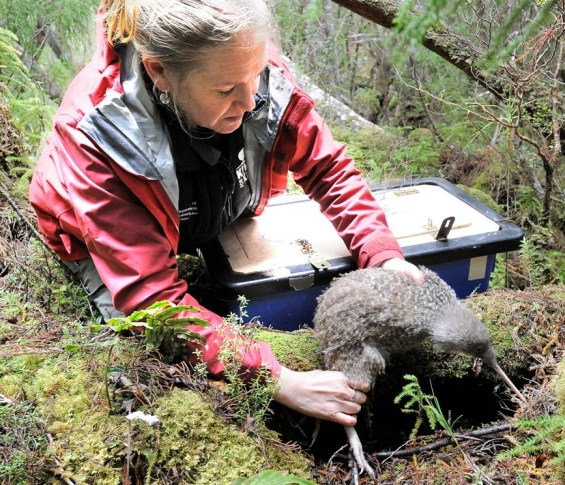 DOC Conservation Services Manager Lindsay Wilson says the kiwi transfer was made possible by financial support from the Fiordland Lobster Company, and is being undertaken in partnership with the Fiordland Conservation Trust, Air New Zealand and iwi.

“Thanks to the help from our partners, establishing a new little spotted kiwi population in Fiordland will help numbers of this threatened species to continue to grow.”

The kiwi were flown from Wellington to Queenstown courtesy of Air New Zealand as part of the partnership with DOC to help transport native species to safe breeding sites around the country.

The care and kaitiakitanga of kiwipukupuku on Kapiti Island for over a century by Ngāti Toa Rangatira has enabled their redistribution back to Dusky Sound.

The birds were accompanied by Hohepa Potini, a representative of Ngāti Toa Rangatira and will be welcomed to the island by Dave Taylor of Ngāi Tahu Rūnaka o Ōraka-Aparima.

Fiordland Conservation Trust Chairman Murray Willans said the Trust was proud to support the kiwi transfer and were grateful for the assistance of the Fiordland Lobster Company.

“The return of the little spotted kiwi to this part of Fiordland puts in place another piece of the jigsaw in the restoration of the Dusky Sound environment.”

The kiwi will be monitored for their first year and if they do well, more birds will be moved to Anchor Island/Pukenui to reach a target of 45 birds.

Little spotted kiwi became extinct on the South Island mainland in the early 1900s—and predator-free islands have become essential for its survival.    The species was first returned to Fiordland toTe Kakahu/ Chalky Island in 2008 and also lives on several other off-shore islands as well as the Karori Sanctuary in Wellington.

The Fiordland Lobster Company has supported several species translocations in Fiordland: mohua and robins from Anchor and Breaksea Islands to Pigeon Island, Dusky Sound in 2006 and North Island kokako from three sites (Mapara, Kaharoa, Rotoehu) in the North Island to Secretary Island, Doubtful Sound in 2008/2009.

Established in 2007, FCT has worked with many different individuals and businesses to bring about outstanding conservation projects in Southland.  Several businesses have on-going relationships with FCT; the encounters with some of New Zealand’s threatened species and amazing wilderness environments experienced by these people  is having a positive impact on their willingness to support future projects.

Air New Zealand and the Department of Conservation (DOC) first joined forces in April 2012 and now have a five and a half year partnership agreement to work together for conservation. Air New Zealand transports some of New Zealand’s most endangered species (birds, reptiles and invertebrates) between regional centres as part of an active recovery programme to safe new breeding sites around the country.

Little spotted kiwi were originally widespread in both the North Island and South Island but were rare in the North Island by the time Europeans arrived.  They remained widespread in the South Island through the 1800s but gradually disappeared from the mainland leaving only a small relict population on D’Urville Island by the early 1900s.  Five of these survivors were transferred to Kapiti Island in 1912 where they flourished.  Management of this species over the past 20 years has reversed its decline due to the growth of the Kapiti Island population and transfers to other predator-free offshore islands and the Karori Wildlife Sanctuary.  The transfer to Anchor Island/Pukenui will increase the habitat further for this species and will contribute to the goal in the Kiwi Recovery Plan 2008-2018 of increasing the current wild population of 2000 birds by 50%.

A team of people from the Department of Conservation will capture little spotted kiwi on Kapiti Island by tracking transmittered birds and searching known daytime burrows with a certified kiwi dog.   Each kiwi will be placed in a specially designed transfer box and transported by boat from the island to the mainland. The boxes will then be placed securely in a vehicle and driven to Wellington where they will be kept overnight. The kiwi will be loaded onto a plane the following morning bound for Queenstown airport. From there the birds will be met by a helicopter and flown directly to Anchor Island/Pukenui. The kiwi will be released into natural burrows on the island.

Little spotted kiwi were once widespread in Dusky Sound, and were known to be still present on Anchor through to the late 1800s. Richard Henry transferred Little Spotted Kiwi (along with kakapo and tokoeka) to a number of islands around Dusky Sound..  Restoration of Anchor Island began in 2001. Already rat and mouse free the resident stoat and deer populations have now been removed from the island and ongoing control is maintained to halt re-invasion. Native species already successfully transferred to Anchor Island include kakapo, tieke (South Island saddleback), toutouwai (South Island robin) and mohua. Anchor Island is presently being managed for the Kakapo Recovery Programme and the ongoing restoration of the island’s biotic communities.

Genetic research also shows that Kapiti Island birds are clearly of South Island origin, rather than from the adjacent North Island (Shepherd 2005).

The effect of this translocation on the source population should be positive. Kapiti Island has a healthy population of little spotted kiwi with the total number of birds estimated to be 1800 and continuing to grow. Due to the high density of birds on Kapiti at 0.5 birds per ha and an increasing population, the biggest threat to young kiwi is now posed by other kiwi protecting their territories. Juveniles are often harassed by adults, probably so much so their chances of survival may be reduced. It would be beneficial to remove some of these juveniles to not only increase their survivorship, but to increase the number of places they can live and allow the expansion of the total population (Robertson 2011).

Kiwi are a taonga species for Māori. Te Rūnanga o Toa Rangatira from the Kapiti area support this transfer and present during the catching, flight and release of little spotted kiwi from Kapiti to Anchor Island.  Ngāi Tahu also support the transfer with local Rūnaka o Ōraka Aparima from Colac Bay/Riverton welcoming the kiwi to their new home on Anchor Island/Pukenui.

The smallest and once the commonest kiwi is vulnerable to stoats at all stages of its life.