Lake Wanaka grebes thrive with a bit of help

Over the last two years, only one pair of grebes lived in the Roys Bay area on the lake but thanks to some innovative work by Wanaka zoologist John Darby, seven breeding pairs have nested and produced 27 chicks and a further five eggs are due to hatch. 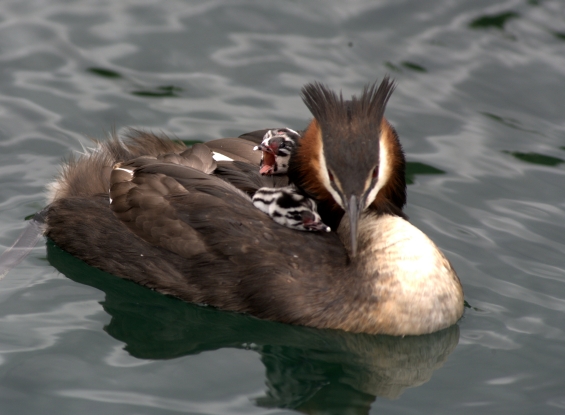 One of the problems faced by this special water bird is they live on floating nests and Lake Wanaka’s fluctuating levels mean their nests either flood or are left high and dry. They cannot walk on land due to their anatomy – their legs are far back on their body – making them vulnerable to predators. Also, there is a lack of suitable habitat.

John said the grebes had been unsuccessful in breeding onshore, and even tried to build a nest on the back of a boat, so he has spent the past two years studying them and designing a floating wooden nesting platform. To handle the lake’s north-westerly storms, he has modified the design from being tethered by ropes and hooks to bolts and chains.

“The grebes were disturbed by well-intentioned people, and dogs, predators and changing lake levels caused problems. So I moved their nests onto platforms, towed them by kayak to the Roys Bay marina, and tethered them to the floating platform where they aren’t disturbed by predators. Surprisingly, activity on the marina doesn’t bother them and boaties have been careful around them,” John said.

Now the birds are happily breeding in the area, John is keen to involve other people in continuing conservation and management of grebes by developing a grebe reserve beside the marina. 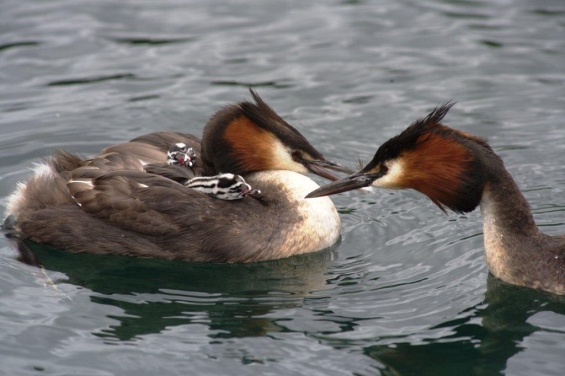 A family of great crested grebes/kāmana

John has a Department of Conservation (DOC) concession to trial his nest platforms. DOC Wanaka ranger Flo Gaud said John’s dedicated conservation work has led to the increase in the number of breeding pairs on the lake and she reminded people to give the nesting grebe’s some space.

The legs of grebes are set well back on their bodies to enhance their diving skills, at the expense of mobility on land. For this reason, the birds rarely, if ever, come ashore.

Grebes once inhabited at least 100 South Island lakes but numbers have been declining and now only 300-400 remain in the South Island. They are fully protected.

Numbers have declined mainly due to introduced predators and habitat loss through wetlands drainage and the establishment of hydro schemes.

Nests can be stranded or flooded by artificial fluctuations in lake levels. Wash generated by motorised water craft can also swamp nests and destroy eggs while the noise can scare adult birds leaving eggs or chicks exposed to the cold or predators.

Animals like stoats, cats and raptors can prey on eggs and fledglings, and introduced fish and birds compete for food and breeding space.