Four kiwi were recently released into the Rangataua Forest south of Ohakune. Three of them ‘flew’ in from Orana Wildlife Park in Christchurch courtesy of Air New Zealand.

The kiwi, named Ahika, Rata, Geyser and Nohi are part of the kiwi recovery programme. They are being re-introduced into the wild to assist in broadening the genetic diversity of the local population. 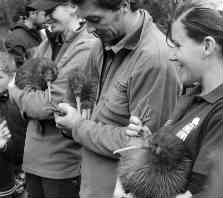 The kiwi getting ready for their release

All of the birds are North Island Brown Kiwi. Rata and Geyser are a successful breeding pair, while Nohi and Ahika who are both males, have been tasked with finding a partner and starting a family.

Ahika, Rata and Geyser ‘flew’ in from Orana Wildlife Park in Christchurch courtesy of Air New Zealand and Nohi, who has been living at Te Puia in Rotorua, arrived more sedately by van with Te Puia staff.

The four kiwi were welcomed to their new home by local iwi, Ngāti Rangi. To date over 75 kiwi have been released into the area and the re-introduction process is jointly facilitated by Ngāti Rangi and DOC.

After the powhiri, the kiwi were introduced to guests including Ruapehu residents and visitors, local schools and DOC staff. DOC Senior Ranger-Biodiversity, Alison Beath, explained the significance of the local area, the importance of public support for the kiwi programme, and the actual ‘nuts and bolts’ of how the kiwi recovery programme works. Guests were then lucky enough to see one of the birds up close as it had a transponder fitted. 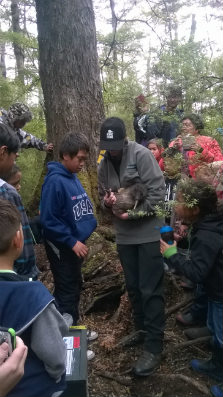 Dave Milner, who is the Pouhono Taiao at the Ngāti Rangi Trust, thoroughly enjoyed the release, “it is such a rare and special occasion to be able to play a part in releasing these Toanga species back into Rangataua, and having four kiwi at one release makes the occasion even more significant.”

Alison, who coordinates the Kiwi recovery programme in the Tongariro district, said the release marked a key point in the recovery programme in the forest, “previously we have been able to re-introduce kiwi that have come from this area originally. But now, as we already have a significant number of locally breeding birds in the forest, we need to introduce birds from different areas to keep that base population healthy and growing.”

Ohakune local Jane Gamble said of the release, “It’s experiences like today that remind us why Ohakune is such an awesome place to live. It’s not every day you get up close and personal with four kiwi. A big thanks to Department of Conservation staff for involving the local school kids and community in this special occasion”.