Ten kakariki or yellow-crowned parakeet have today been released into the Abel Tasman National Park to join a further 12 birds released last year.

Ten kākāriki or yellow-crowned parakeet have today been released into the Abel Tasman National Park to join a further 12 birds released last year.

Students from Golden Bay’s Motupipi Primary School were on hand to help Project Janszoon release the captive raised birds from a purpose built aviary near Wainui Hut, in the top of the park.

Project Janszoon aviculturist Rosemary Vander Lee says the birds were keen to leave the aviary and she could tell they were excited about their new surroundings as there was a lot of chattering. 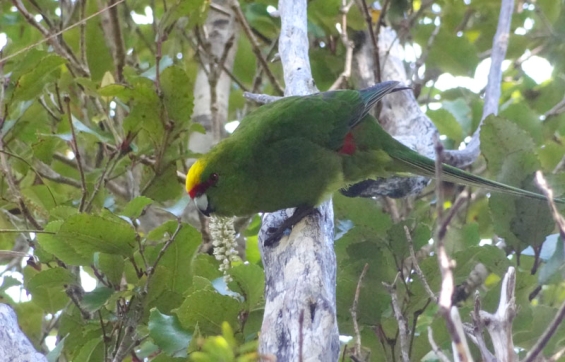 “Since the birds have been in the aviary we have noticed another pair of kākāriki coming to visit and these are likely to be some of the birds we released last year. It is encouraging to see they are still around and we still have a bit of summer left so the birds may even breed before winter which would be wonderful,” she says.

The kākāriki were transferred to the aviary last week to acclimatise to their new home. The native birds were bred at Lochmara Lodge in Queen Charlotte Sound.

Project Janszoon Director Devon McLean says extensive predator control in the area should provide a safe habitat for the birds.

“We have completed an extensive stoat trapping network, and undertaken an aerial 1080 drop in response to the beech mast, so the birds will have the best chance possible to thrive. The goal is to continue to release kākāriki into the park annually, in early and late summer. It will be exciting when more unbanded kākāriki are seen in the area as that will be a sure sign the birds are breeding as well.

I would also like to thank Lochmara Lodge for breeding the kākāriki. Without support from them and other breeding aviaries, reintroducing birds into the park would not be possible,” says Mr McLean

While it is too early to tell how the 12 kākāriki released in May last year are doing, Project Janszoon ornithologist Pete Gaze saw four in one tree when he was monitoring the area in late 2014.

“The released birds will supplement the few kākāriki still surviving in the park and together should provide sufficient numbers for the population to grow in the improved environmental conditions,” he says.

Lochmara Lodge, EcoWorld Aquarium and Tui Nature Reserve are now all raising kākāriki on behalf of Project Janszoon and a fourth breeding aviary is likely tocome on board soon.

Project Janszoon is a privately funded trust named after Abel “Janszoon” Tasman. Over a 30-year time frame It will work with DOC, the Abel Tasman Birdsong Trust, the community and iwi to reduce predator numbers and weeds, restore eco-systems and re-introduce native birds, animals and plants in the Abel Tasman National Park.For further information on Project Janszoon visit www.janszoon.org or like Project Janszoon on Facebook.

Kākāriki, meaning ‘small green parrot’ in Māori, are beautiful forest birds. They feed on berries, seeds, fruit and insects, and generally nest in holes in trees.