The two geckos were seized in Germany in December 2013 from a German national and placed under the care of staff from Cologne Zoo. The markings on the geckos indicate they were poached from Otago. 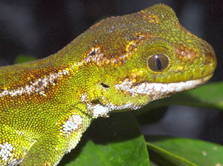 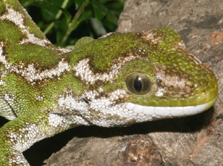 “For many New Zealanders, geckos are considered a taonga or treasure so we are delighted that the hard work of New Zealand and German authorities has resulted in their return,” Ms Wagner says.

“This is the first time that poached, live New Zealand wildlife has been repatriated from overseas.

“The geckos have been flown back to New Zealand and placed under the care of Wellington Zoo. Wellington Zoo has vast experience in caring for reptiles and is the best place for the jewelled geckos to be quarantined while they settle back into their natural climate and recover.

“Gecko smuggling is a serious challenge. All species of green gecko, including jewelled geckos, are in decline due to a combination of predation from introduced mammals and poaching.

Both New Zealand and Germany take a strong stand on wildlife crime. We will continue to work closely with our international partners to stamp out these illegal activities and safeguard our precious wildlife for future generations.

“I would like to thank Cologne Zoo for their wonderful care and attention to our national treasures, and also to the German authorities for their efforts in investigating this case and helping us to bring the geckos home,” Ms Wagner says.

Jewelled geckos are endemic to New Zealand and are well known for their bright colour and striking markings.

Because of their unique biosecurity status – native, but exposed to unknown biosecurity threats overseas – the geckos cannot be returned to the wild and experts will be considering the best option for their long term containment.

All New Zealand geckos are fully protected under the Wildlife Act 1953. The export of wild geckos from New Zealand for trade on the overseas market without the proper authority is illegal, and jewelled geckos have never been legally exported from New Zealand.

In March 2013, New Zealand successfully led efforts to increase protection of jewelled geckos through stronger regulations under the Convention on International Trade in Endangered Species of Wild Fauna and Flora (CITES).