A baby humpback whale spotted in Cook Strait is only the second one reported in New Zealand waters.

A baby humpback whale spotted in Cook Strait yesterday by a Department of Conservation whale research team is only the second one reported in New Zealand waters.

The first newborn humpback calf was seen in July 2010 also during the annual DOC Cook Strait Whale Survey which is timed for humpback whales' migration from the Antarctic to South Pacific breeding grounds.

The exciting encounter with the newborn humpback calf with its mother came just two days after the whale survey team had the remarkable sighting of rare white humpback whale identified by comparing photos as being the famous Migaloo that is usually seen off Australia. 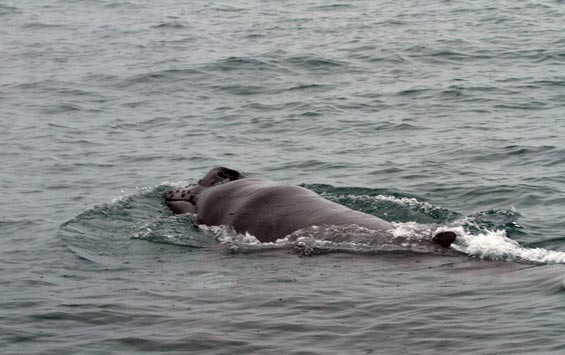 Humpback calf with its mother

"We marvelled at how lucky we were to witness such a miracle as a newborn whale. We hope it travels safely to warmer waters."

"The two calves we have seen were likely to have been born prematurely in our waters. The former whalers who work with us on the whale survey assure me they never saw newborn calves in their day."

"The calf we saw yesterday still had faint foetal folds and was about 3-4 metres in length. It was probably several days to a week old but it is hard to be sure. The mother was relatively small and the calf was possibly her first."

The annual whale survey, a DOC partnership with OMV New Zealand, has so far spotted 136 humpback whales, the highest number in its 12 years with three days of the four-week survey to run. The previous highest tally was 106 in 2012.

The research is assessing humpback whale recovery since commercial whaling ended in New Zealand in 1964 and also aims to estimate the size of the humpback population in our waters.

Nadine Bott said the higher number of humpback whales being seen indicates their New Zealand population is 'bouncing back'.

A whale spotted in Cook Strait has been identified as 'Migaloo', a rare white humpback usually seen off Australia.