Historic Hooker Hut has been removed from its precarious position above the crumbling moraine wall of the retreating Hooker Glacier, in Aoraki/Mt Cook National Park.

The oldest hut in Aoraki/Mount Cook National Park is on the move again this week. The Department of Conservation (DOC) is taking action to save the historic Hooker Hut from slipping into the Hooker Glacier. 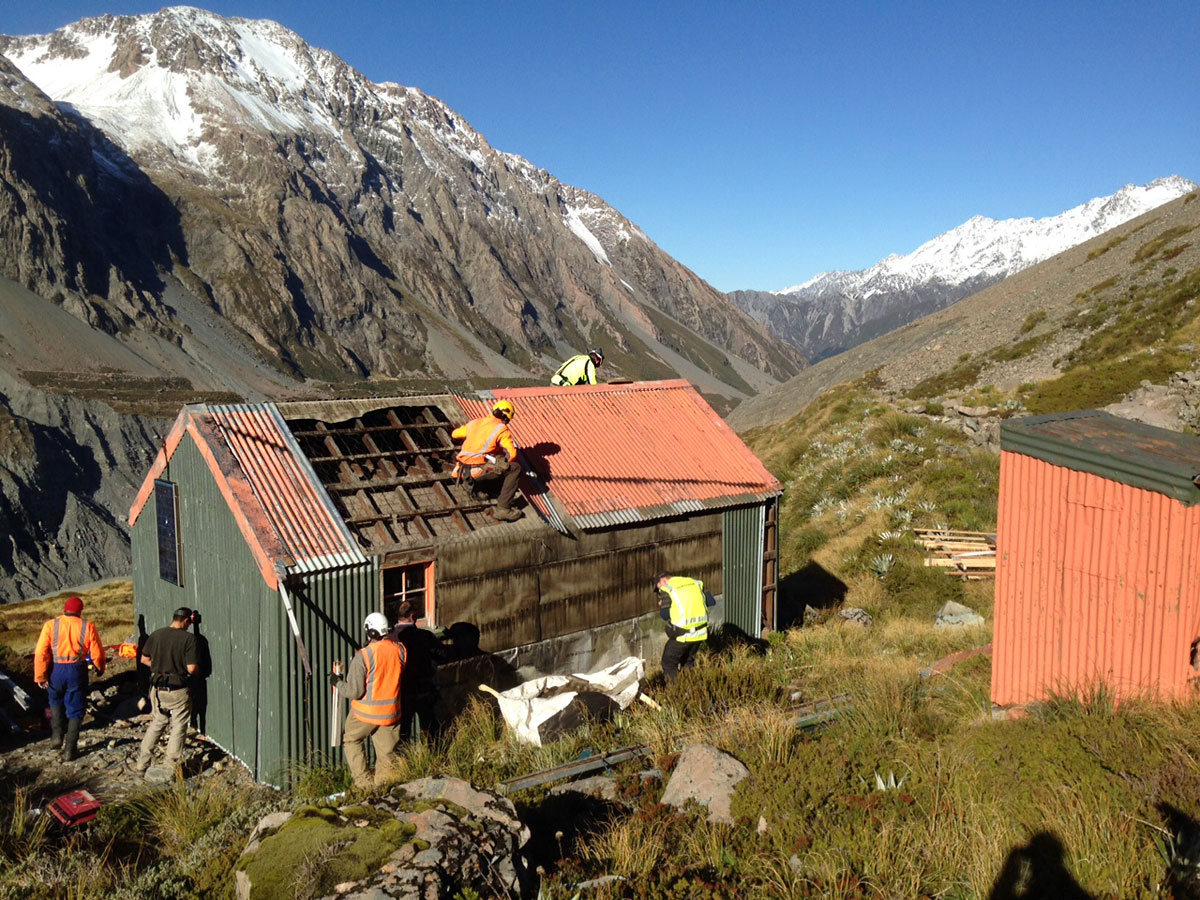 “This will be the hut’s fourth move since being built in 1910, due to Aoraki’s turbulent geography,” says DOC Conservation Services Manger, Mike Davies.

“As the Hooker’s moraine wall gradually crumbles and retreats, the hut now faces an imminent threat of slipping into the glacier below.” 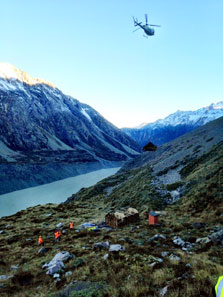 Hooker Hut's roof being lifted off by helicopter 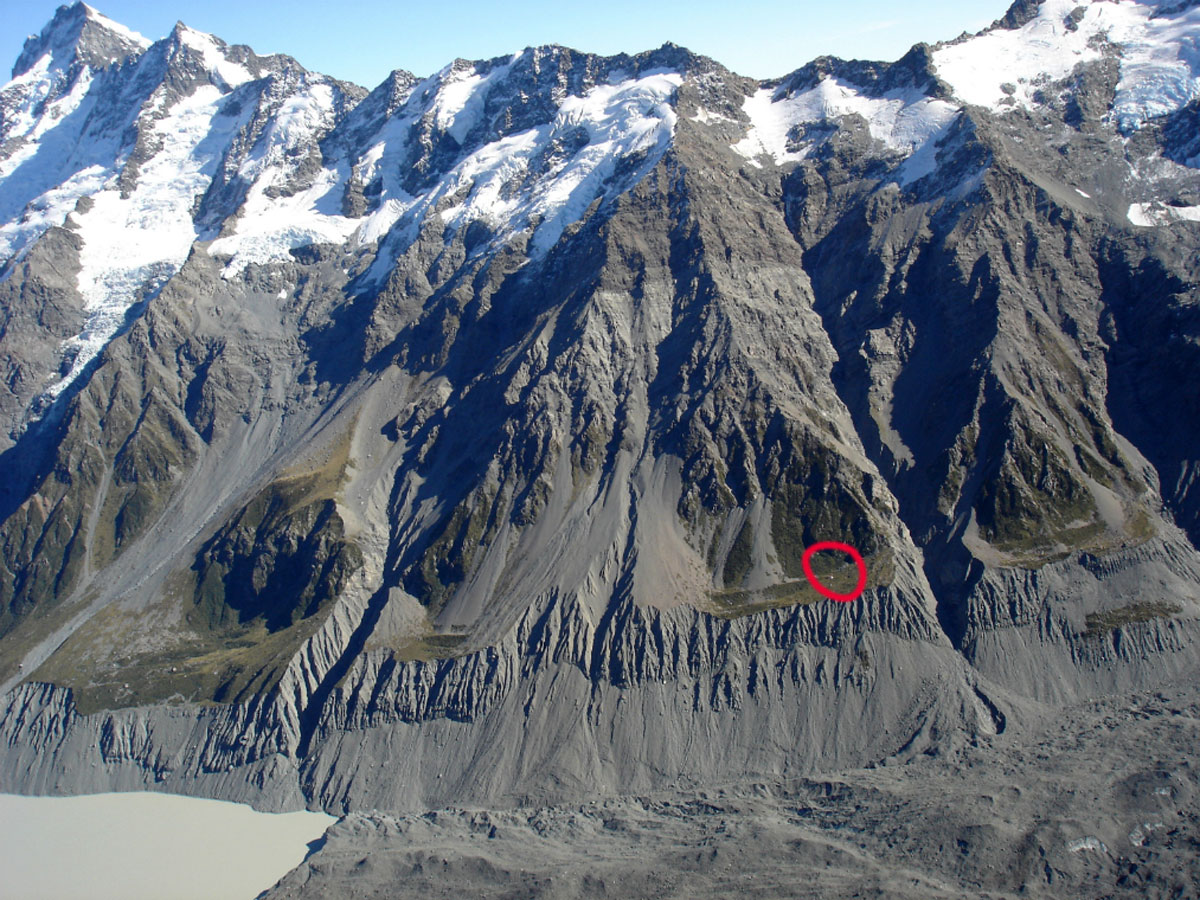 Since Hooker Hut’s third relocation, in 1994, to its current position, heavy rainfall (that same year) destroyed the main access route to the hut. In 2005 a new hazard exposed itself when the hut was hit from behind by a snow avalanche.

“The constant relocation of the hut, along with the removal of Gardiner Hut from the national park last month, illustrates the challenge of building and maintaining huts among New Zealand’s highest peaks,” says Mike Davies.

“Aoraki’s landscape is in a state of constant unrest, exposed to extreme forces of nature—high winds, heavy rain and snow, harsh temperatures and seismic activity. This is all greatly exacerbated by glacial retreat in recent times, and forces the need to constantly reassess risks faced by visitors using the park’s huts and tracks.”

Originally used by climbers to access the upper Hooker Glacier, the hut became more commonly used as an easy overnight trip from Aoraki/Mount Cook village, or as a stopover when crossing the Copland Pass. After access to the hut was severely impaired in 1994, visitor numbers to the hut were greatly reduced. In the last two years only three people have been recorded as having stayed at Hooker Hut.

“Hooker Hut has had a long and interesting history including several reports of supernatural activity from overnight visitors!  Now over 100 years old, it is a superb example of alpine huts built around the start of the 20th century,” says Mike Davies.

Funding for the removal of both Gardiner Hut and Hooker Hut has come from a bequest from the deceased estate of outdoor enthusiast, Alannah Bartle Matches. Alannah and her late husband Kenneth Arthur Orpen Matches, both retired School Principals, wished to recognise and support DOC’s work, so that others might have access to and enjoy Aoraki’s huts, tracks and wildlife for years to come. The bequest will pay for the refurbishment and repositioning of Hooker Hut, so that it can provide an accessible alpine experience to a wide range of park users.

“We want to see this important piece of Aoraki’s heritage in a location in the Hooker valley where it can once again be well-used by visitors to the park,” says Mike Davies.

The hut will be moved by Recreation Construction Ltd, who will dismantle and fly it out flat-packed. It will be stored in Twizel until a decision is reached on where to relocate it. This will link in to the review of the Aoraki/Mount Cook National Park Management Plan later this year.

Construction of the first Hooker Hut was started.  The materials were packed in from the Hermitage up the Hooker Glacier via pack horse to within two miles of the hut site.  The hut was designed by Peter Graham, Chief Guide at the Hermitage, and built by two of his guides Jim Murphy and Darby Thomson.

“A fine position had been selected on a high grass terrace 200 feet above the Glacier and commanding a grand view down the valley of the Sealy Range, and in the distance the brown tussock hills of the Mackenzie Plains” – Peter Graham

Hooker Hut was moved back from the unstable edge of the moraine of the Hooker Glacier.  Major repair work was carried out at this time, and the materials were flown in by aeroplane and dropped as bundles with parachutes attached.

This was reported in the Press “For the first time in the history of mountaineering in the high alps of New Zealand, aircraft will be used to drop building materials to parties on isolated plateaus and glaciers, when works start next spring on the repair and reconstruction of a group of climbing huts in the Mount Cook region.”

The hut was moved back even further

The hut was moved to its present site, and a deck was added to the front.

Access to Hooker Hut becomes problematic when the track is washed out after heavy rainfall and the Stewart Gut is badly eroded and deeply incised.  Very few people have accessed the hut by foot since then

An avalanche hits the back of the hut

Hooker Hut is taken apart and flown out and stored to allow restoration work to take place and a safer site to be found.

Alannah Bartle Matches was 83 years old when she passed away on 7 January 2014 after a short illness. She had a long time love of tramping and the outdoors and was also an avid photographer.

Her bequest to the Department of Conservation will also pay for the extension of the department’s kakī/black stilt brooder room and bridge replacements on the Heaphy Track.

Hooker Hut has been removed.