Heavy snow has damaged two of three aviaries used for captive rearing of black stilt or kakī near Twizel, but most of the birds are safe.

More than 40 cm of snow caused one aviary to collapse last Thursday night, while another has been badly damaged and will have to be demolished.

However, only three of the 12 birds in the collapsed aviary are missing with the remainder either re-caught or seen nearby.

Meanwhile, DOC rangers are working in record cold conditions to rescue the 19 young birds from the second damaged aviary. 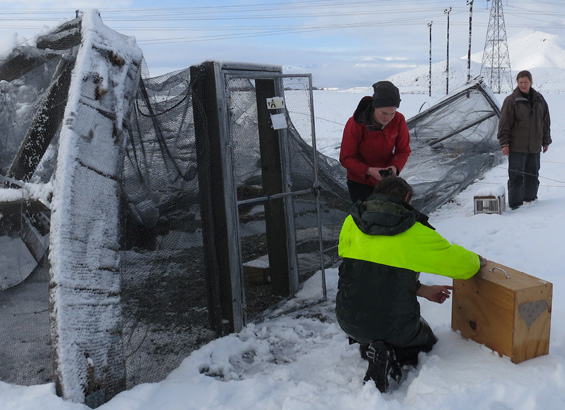 DOC Services Manager Dean Nelson says luckily most of the hand-reared birds are safe, including the two breeding pairs, and the priority now is to get the birds out of the second damaged aviary.

“Temperatures reached minus 20 degrees here last night and conditions are still very cold but staff will today try and coax the birds out of the other damaged aviary, which is unsafe to enter.”

Dean Nelson says the Isaac Conservation and Wildlife Trust have offered DOC the use of two spare aviaries at their facility at Peacock Springs in Harewood.

“This solves our immediate problem of housing the birds until they can be released into the wild in the Mackenzie basin in spring.”

“It’s too early to know the impact of losing two out three aviaries on the captive breeding programme but thanks to Isaacs we will get through this winter.”

Both of DOC’s wooden-arch aviaries are nearly 30 years old and had been damaged previously with snow. A third and newer steel-arch aviary housing more than 40 young kakī is fine.

Black stilt are a critically endangered wading bird found only in the Mackenzie and Waitaki area.

DOC’s kakī captive breeding and rearing programme is critical to sustaining the wild population of this threatened species.

The Isaac Conservation and Wildlife Trust work in partnership with DOC as part of this programme and is currently looking after more than 30 juvenile kakī.

Kakī, or black stilt, is a native wading bird only found in New Zealand. It is regarded by Māori as a taonga species – a living treasure.