Ginger is the new black 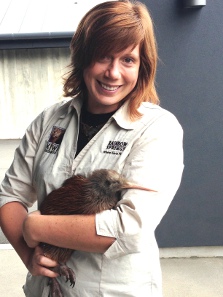 Kindara, the uniquely coloured kiwi chick at his stoat-proof weight was released back into the wild. 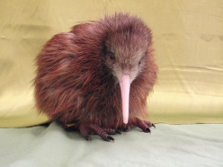 Kindara when he was a chick

The Ginger Kiwi followed Manukura the White Kiwi last November for his unique colouring. His colouring tickled the fancy of red head Emma Bean who works at the Rainbow Springs Kiwi Encounter where Kindara’s egg was incubated and hatched. Ms Bean made a special trip to Ohakune for Kindara’s release to the wild into the Karioi Rāhui on the southern side of Mt Ruapehu.

Also at the release were students from Tauhara College, Kindara’s sponsors. They watched Kindara’s journey after sponsoring the chick raised at Rainbow Springs, and gained naming rights through the National Kiwi Trust. They visited Kindara in Rotorua after he hatched, and were there to welcome him to crèche at the Wairakei Golf + Sanctuary, Taupō in November. Two students helped the DOC Kiwi team catch Kindara at Wairakei, and a group of students went to the forest to take part in Kindara’s release.

Tauhara student Tegan Clark explained, “Through Kindara’s sponsorship, the students know more about the kiwi and their plight, and the efforts going towards saving kiwi”.

Kindara is one of an estimated 70,000 kiwi left in New Zealand. He’s one of the lucky ones with a very good chance of survival thanks to a great collaborative effort.

“This is what saving kiwi is all about – inspiring future generations to care for our native species”, says Kiwis for Kiwi executive director Michelle Impey.

If you are interested in learning more about how you can help save kiwi, or to make a secure online donation, visit Kiwis for Kiwi.

If you are specifically interested in supporting the work of the Kiwi Encounter donate at Rainbow Springs or for naming rights, email sponsorship@nkt.org.nz 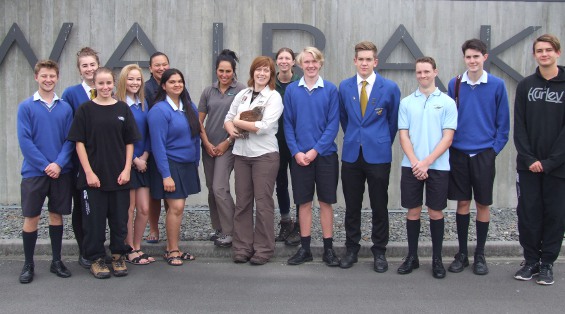 Kiwis for kiwi is the trading name of The Kiwi Trust. Established in October 2012, it continues more than two decades of work by BNZ Save the Kiwi Trust to help protect kiwi and the places they live. Kiwis for kiwi raises and distributes funds to community, DOC and volunteer groups helping save kiwi throughout the country.

The National Kiwi Trust obtains funding to provide sustainability and growth to the development of the Save the Kiwi Program. Each chick on the ONE programme stays at Kiwi Encounter for an average of 4-6 months, with the annual cost of the whole programme to be over $400,000.

BNZ Operation Nest Egg is a powerful tool to reverse the decline of kiwi populations. Eggs and chicks are harvested from nests to save them from their number one threat - stoats. The young kiwi are returned to the wild when they weight about 1 kg, big enough to fight off these predators. More than 2,000 kiwi chicks have been returned to the wild since its inception in 1994, with captive facilities and hundreds of field workers from DOC and community groups throughout the country contributing to its success

Kiwis for kiwi works in partnership with DOC with a vision to take kiwi from endangered to everywhere. Kiwis for Kiwi provides funding to The National Kiwi Trust to support the work at Kiwi Encounter.