Rare native parakeets are today being released back into a Canterbury high country valley for the first time ever.

Rare native parakeets are today being released back into a Canterbury high country valley for the first time ever.

The 25 orange-fronted parakeets/kākāriki karaka, bred by The Isaac Conservation and Wildlife Trust, will be set free in the Hurunui South Branch to bolster a small remnant population there.

More than a decade of pest control has paved the way for the return of the captive-reared birds, which in previous years have been released on predator-free islands.

DOC Conservation Services Ranger Simon Elkington said with low levels of rats and stoats as a result of successful trapping and aerial pest control, there was now an opportunity to boost numbers of the critically endangered parakeet in the valley.

“There are a handful of orange-fronted parakeets left in the South Branch and the new birds are a step towards creating a self-sustaining population there.” 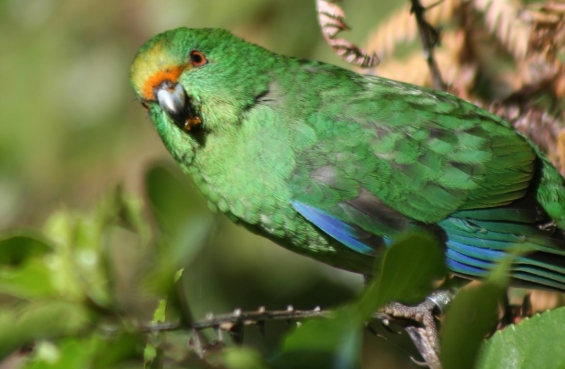 The Isaac Conservation and Wildlife Trust Executive Chair, Rob Clarke, said putting orange-fronted parakeet back into their natural habitat was part of the Trust’s vision.

“Our wildlife conservation work is focussed on creating a future for some of New Zealand’s most threatened species such as orange-fronted parakeets.”

The Trust is the only captive breeding facility for the parakeets and provides up to 45 young birds each year.

Intensive pest control in the Hurunui South Branch, and Hawdon and Poulter valleys where the parakeets also live, has been crucial to the bird’s survival, particularly following beech mast (seeding) years when rodent and stoat numbers rise dramatically, said Elkington.

The population in the South Branch was decimated 15 years ago when a big beech mast drove rat and stoats to plague levels.

Orange-fronted parakeets are the rarest of New Zealand’s parakeet species with an estimated population of 200–400 and are nationally endangered.