A postmortem of the elephant seal pup born on Caroline Bay last month showed it died of starvation.

The post-mortem by Massey University’s senior lecturer in pathobiology Dr Wendi Roe showed the two-week old seal pup had no food or milk in his stomach so it appears he had never suckled. He was severely underweight, weighing only 24kg at the time of death, when he should have weighed about 80kg.

DOC Conservation Services Manager Dave Winterburn said the elephant seal mother was a first-time mother and may not have known how to feed, had poor maternal skills or may have had an infection so wasn’t producing milk. Dr Roe and her team will be looking at tissue from the pup to determine if it had an underlying disease.

Caroline Bay was an unusual place for an elephant seal to be born, as they are normally born in the subantarctic islands. The beach was cordoned off following his birth, due to potential for harassment.

The elephant seal pup born on Caroline Bay in Timaru on 24 September 2015 has died this afternoon. The cause of the pup’s death is unknown.

DOC Conservation services manager Dave Winterburn said staff had been concerned the pup was not achieving the expected weight gain and had investigated what intervention measures would be feasible.

“Our marine mammal experts have advised against any kind of intervention while the mother remained with the pup. Possible measures when the pup was left to fend for itself had been explored, but unfortunately the pup has not survived to this stage,” Dave said.

It is an unusual occurrence for an elephant seal pup to be born on the mainland, and being born outside of the normal range for the species may have made survival more difficult.  It is unknown why the pup was born on the mainland rather than at the usual subantarctic breeding grounds.

When the pup can be removed from the beach it will be sent to Massey University for an autopsy. 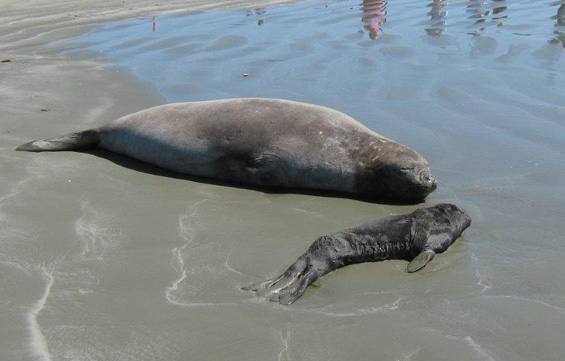 The mother elephant seal and pup at Caroline Bay, Timaru