The shark cage diving season begins today. DOC says it will continue watching the two cage diving operators on Stewart Island to ensure the activity is not harming sharks or causing increased risk to people.

Both operators are on their last warning after one breached conditions last season over throw bait use. If either operator breaks the conditions again this season, they will lose their permit. 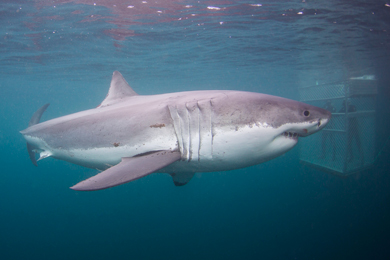 DOC introduced permits for cage diving last year to manage risks from this activity, which was unregulated before 2014. DOC has completed a review of the cage diving season from December 2014 to June 2015. It has renewed the permits issued to the two operators for the 2015-16 season, but with a number of changes.

Changes made to these permits include tighter controls on bait and berley (ground fish) use, and limiting operators to using one vessel a day.

There will be more monitoring trips than last season. Observers will regularly check the operators, particularly around methods of attracting sharks.

Observers will be both uniformed staff and ‘secret shoppers’. They will ensure the operators are following permit conditions.

DOC’s Operations Director for the Southern South Island Allan Munn said, “We’ll be keeping a close eye on whether operators are adhering to the conditions.”

The permits continue to limit operations to one site near Motunui/Edwards Island, 8 km from Stewart Island, and also have rules for operators that prevent sharks from being fed and rewarded around people.

DOC will review the permits in August next year. It will consult with stakeholders, iwi and the public through the 2015-16 season and the August 2016 review.

DOC will continue research into shark movements and numbers around Stewart Island.

Great white sharks are a protected species. About 100 sharks visit Foveaux Strait each year between December and June.

Shark cage diving involves tourists viewing sharks from a cage attached to a boat. This activity was unregulated for several years before DOC introduced the permitting system last year.

Under the Wildlife Act, DOC controls, manages and monitors impacts on great white sharks. It also has concerns about human safety around shark cage diving operations.

Shark cage diving is where tourists view sharks underwater at close range from the safety of a submerged cage attached to a boat.