DOC and Delta are working together to reduce the risk of New Zealand falcon/kārearea being electrocuted when they perch on overhead power equipment. 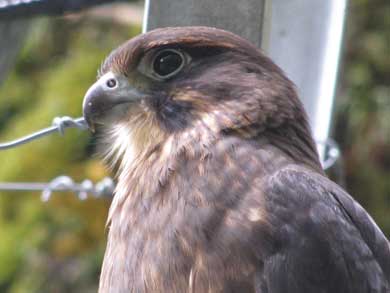 The New Zealand falcon is rare and faces a range of threats including introduced predators, loss of habitat, illegal shooting and electrocution when landing and taking off from un-insulated power structures.

DOC and Delta have formed a conservation partnership to address suspected falcon electrocutions on overhead power lines in the Queenstown Lakes and Central Otago areas. To date, Delta has retrofitted insulation to four sites in Glenorchy (near Queenstown) including several transformers and lightning arrestors. The new designs remove the ability of a falcon’s wings to bridge live wires and equipment.

“Delta’s efforts to minimise falcon electrocutions is pioneering work to address a long-standing issue across New Zealand. We believe they are showing strong leadership for wildlife conservation,” says Allan.

DOC and Delta will also work together to promote the New Zealand falcon story in the local community. They aim to raise awareness of the other risks to falcon and explain how the public can also help protect this special bird.

“Over time, we expect falcon safety will gradually improve as we retrofit hazardous structures in high risk locations across the Delta’s network in Queenstown, Cromwell, Alexandra and Wanaka. Delta will label power poles that use the modified design as ‘FalconSafe’, to provide a lasting reminder to communities that falcon can now live and breed more safely.”

Any new installation will also be built to the new, falcon-safe design standard. We plan to share our developing knowledge on falcon safety with other electricity networks in the hope that other parts of the country can be made safer for the NZ falcon,” says Grady.

The falcon is one of our most spectacular birds. They are the country’s only endemic raptor, or bird of prey, and are capable of flying over 100 km/h. The bird features on the $20 note, was voted bird of the year in 2012 and is displayed on emblems and logos across the country. For Maori, kārearea are a taonga species, a treasure of cultural importance.

Falcon are sometimes confused with the larger harrier, which is commonly seen feeding on road-kill. The falcon rarely feeds on carrion, is much smaller (about the size of a magpie) and flies more directly using rapid wing beats.

While numbers are slowly recovering from past declines, there are still too few to consider them safe from extinction. Electrocution on overhead power equipment can be a serious threat in some areas. A study in Marlborough tracked 55 falcons over five years, finding that of the 21 that died, nearly half of these were electrocuted on overhead power equipment. Electrocuted falcons have also been found below power poles in Glenorchy. The falcon’s tactic of perching to ambush its prey, and to brush past vegetation when flying, makes it prone to electrocution hazards.

The FalconSafe initiative has potential benefits for the protection of other bird species. Electrocutions have been recorded for harriers/kahū, wood pigeon/kererū, kea and kākā, though to a lesser extent than falcon.

Delta is the infrastructure specialist in energy and environmental services and manages the electricity network for Queenstown Lakes, Central Otago and Dunedin on behalf of Aurora Energy. We bring smart thinking to infrastructure management, operation and maintenance.

Capable of flying at speeds over 100 km/h and catching prey larger than itself, the New Zealand falcon is one of our most spectacular birds.