A 15 metre whale has washed up at the southern end of Oreti Beach, near Invercargill.

DOC is working with local rūnanga to ensure tikanga is followed in management of the whale on the beach.

Juzah Zammit-Ross, DOC Biodiversity Ranger, confirmed it is a sperm whale (Physeter macrocephalus). “The whale looks like it has been dead for at least 3-4 weeks. DOC was first notified about this dead whale floating in Foveaux Straight close to Oreti Beach approximately two weeks ago,” Miss Zammit-Ross said.

Now the whale has washed ashore, DOC has been able to investigate the whale carcass safely. Measurements and a sample for DNA analysis have been taken.

“The cause of death is unknown, however, it is not uncommon for whales and dolphins to strand or wash up dead on South Island beaches. A range of factors can cause these incidents and, depending on the condition of the carcass, it’s often difficult to determine the cause of death.”

The whale is decomposing and people should avoid touching the carcass, or the water pooling around it, as this could cause infection or sickness.

The public should take care when viewing the whale carcass and ensure children and dogs stay away from it to avoid contamination.

“Marine mammals are protected by legislation to ensure people don’t harm live animals or interfere with dead animals without prior permission of the proper authorities.

”It is an offence to take all or part of a marine mammal. Those who do so can face court action and penalties of up two years’ imprisonment or a fine of up to $250,000. 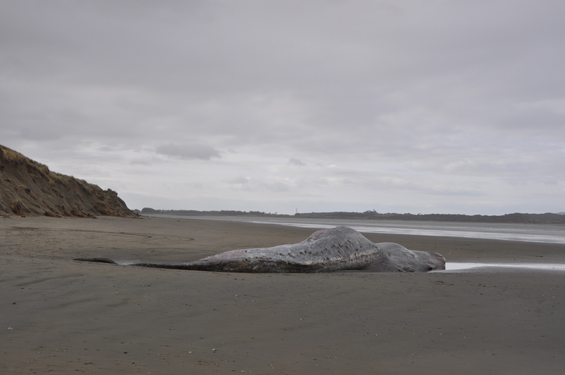 The dead sperm whale washed up on Oreti Beach

Sperm whales are one of the easiest whales to identify at sea. These animals are widespread around the world, but have a patchy distribution.