One of Arthur’s Pass iconic backcountry huts was burnt to the ground sometime between Thursday and Friday last week. 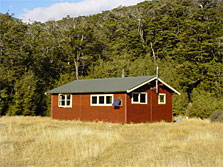 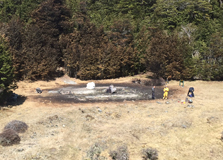 A tramping group heading from Andrews Shelter (by the Mount White access point into the Arthur’s Pass National Park) came across the smouldering remains of Casey Hut on Saturday afternoon.

Fortunately the hut appeared to have collapsed in on itself and had not spread to surrounding vegetation despite the dry nor-west conditions.

Fire investigators and DOC staff assessed the hut remains this morning. Initial results suggest the fire started around the hut entrance or woodstove but this is still subject to confirmation.

DOC Senior Ranger Pete Brady says this is quite a loss in a very popular area for weekend tramps and also as a starting point for longer routes such as the route to Lake Minchin and Taramakau River.

“The six-bunk Trust Poulter Hut is a further one and a half hours trek up the Poulter Valley; this could just put the option for a family overnight tramp just out of reach for some user groups”.

Built in the late 1960s the 16-bunk Casey Hut was one of the first five Lockwood designed huts commissioned by the Arthur’s Pass National Park Board. Another popular Lockwood hut, the Hawdon Hut, burnt down in June 2005 and was rebuilt in December 2007.