Conservation Minister Dr Nick Smith today announced at Karamea on the West Coast the permanent approval of mountain biking on the Heaphy Track from 1 May to 30 September each year.

Date:  07 January 2014 Source:  Office of the Minister of Conservation

Conservation Minister Dr Nick Smith today announced at Karamea on the West Coast the permanent approval of mountain biking on the Heaphy Track from 1 May to 30 September each year.

“The three-year trial has been a success and it is timely to make it a permanent feature of Nelson and the West Coast’s visitor attractions. Year-round mountain biking has also been approved on two other Kahurangi National Park tracks – the Flora Saddle to Barron Flat and Kill Devil tracks.” 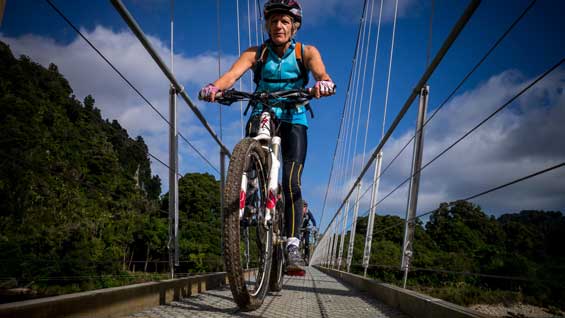 Mountain biking on the Heaphy Track has been permanently approved

Dr Smith first proposed the idea in a letter to the New Zealand Conservation Authority (NZCA) in 1998 when he was first the Minister of Conservation and the trial was later introduced on the Heaphy Track in 2010.

“It has been a long and painful process getting the changes to the general rules for National Parks and the necessary amendments to the park plan approved by the NZCA and the Nelson Marlborough Conservation Board,” Dr Smith says.

“There has been a lot of debate about the impact of mountain bikers on the track and their interaction with trampers. The reality is that the Heaphy Track and its hut facilities had little use, with only about 500 users during these winter months. The feedback from both bikers and trampers has been that with goodwill and common sense, both can use the track. The damage to the track and the impact on species like Powelliphanta snails was found to be of little difference between bikers and trampers.

“This positive announcement will be particularly welcomed in Karamea and Collingwood. These small centres have benefitted from approximately 2000 people who have biked the track each winter period over the past three years when fewer visitors have been around.
“There has been significant uncertainty since the trial ended in September, and this decision enables the Nelson and West Coast’s visitor industries to plan and market their facilities and services knowing that winter mountain biking is now here to stay.

“Consideration is also being given to extending the mountain biking season from five months from1 May to 30 September, to eight months from 1 March to 30 November, excluding the Easter period. The proposal, put forward by DOC, will be considered at the time of the next Kahurangi National Park Management Plan review in 2014/15.

“This extension is estimated to increase the number of bikers on the track to 4000 per year, and the annual economic benefits to Golden Bay and Karamea from $2.3 million to $3.4 million. I am confident that if we invest in good facilities and track improvements the infrastructure can cope with these increased numbers.

“DOC has also invested in a new hut at Heaphy and four new major suspension bridges on the track. Further track upgrades in the Mackay Hut area are planned for next year. We have also come to an arrangement with the Tasman District Council where DOC will construct three new bridges at a cost of $630,000 on the final five kilometres of metal access road to the Golden Bay end of the Heaphy Track to improve all-weather access.

“I urge bikers not to attempt to ride the track in one day or to underestimate the terrain, and on advice from mountain biking experts, the grading has been raised from intermediate to advanced.

“This confirmation of the Heaphy as a long-term mountain biking winter track is exciting for both the Nelson and West Coast regions. It is these sorts of unique experiences that help define the lifestyle and adventure that makes this part of New Zealand such a great place to live and visit.”