Seven kahikatea were planted to celebrate a multi-organisation partnership led by Project Tongariro receiving a grant for restoration and preservation work at Te Mātāpuna wetland.

Seven kahikatea were planted on Tuesday (26 August) to celebrate a multi-organisation partnership receiving a grant for restoration and preservation work at Te Mātāpuna wetland, south of Motuoapa.

Project Tongariro is delighted to be a recipient of the Government’s Community Conservation Partnership Fund, which has allocated them $208,000 over the next three years.

“New Zealand has lost over 90 per cent of its wetlands yet they are some of the most important ecosystems for the protection of plants and animals,” says Conservation Minister Dr Nick Smith, who joined the community to plant trees at the celebration.

“The conservation of the Te Mātāpuna wetland is hugely important with it being the largest wetland in the Central North Island”.

One of the many challenges at this site is a major infestation of grey willow, which displaces native plants and species, blocks the wetland and forces permanent change. To mitigate this, willows are removed and replaced with riparian plantings including trees such as kahikatea and houhere (ribbon wood).

At the planting Project Tongariro President Paul Green acknowledged grant funding from the Waikato Catchment Ecological Enhancement Trust and Waikato Regional Council that have supported the project for several years and continue to do so.

The Department of Corrections is also a partner in the project, and as part of the Government’s ‘working prisons programme’ inmates at Rangipo prison’s plant nursery raise seeds for the project and provide people to help plant trees as well as carrying out on-going weed control and other operational support.

The Department of Conservation and Project Tongariro are in the 10th year of actively protecting biodiversity at the site. 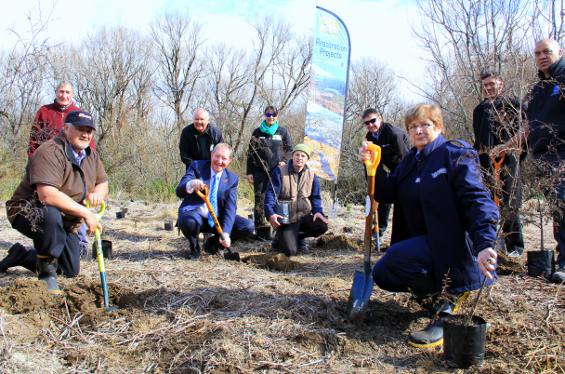 Celebrating funding for the Te Matapuna wetland with the planting of kahikatea are the Minister of Conservation Dr Nick Smith, Ngāti Tūwharetoa, Project Tongariro, and the Departments of Conservation and Corrections

Established in 1984, Project Tongariro is a non-profit organisation that has been active in the region for 30 years. It’s a community group who works in partnership with the Department of Conservation on many projects and whose goal is to promote a wider knowledge and appreciation of the unique natural heritage, historic, educational and recreational values of Tongariro National Park and its environs.

About the Community Conservation Partnerships Fund

The fund, announced in March 2014, has approximately $26 million dollars to distribute to community groups for priority conservation work over four years. In the first year $8.5 million is being allocated across more than 100 community organisations.