A ‘boot camp’ for whio was opened at the Tongariro National Trout Centre near Turangi by the Minister of Conservation Hon Maggie Barry yesterday.

A ‘boot camp’ for whio was opened at the Tongariro National Trout Centre near Turangi by the Minister of Conservation Hon Maggie Barry yesterday.

The release of the first whio ducklings into the new whio aviary marked a major step forward in the battle to save the endangered whio, or blue duck.

The Minister Hon Maggie Barry together with Genesis Energy CEO Albert Brantley released the first ducklings into the new hardening facility along with iwi representatives, local and visiting children.

“This opening signals a significant milestone in securing a bright future for this iconic species, and is another successful example of the Department of Conservation’s relationship with Genesis Energy” said Ms Barry.

“This ‘boot camp’ is the first dedicated facility on the North Island and supports the whio captive breeding programme by providing a safe environment for captive reared ducklings,” says Ms Barry.

Genesis Energy’s Chief Executive Albert Brantley said, “The Whio Forever programme is the embodiment of the long-running and fruitful relationship between Genesis Energy and the Department of Conservation. This new facility will not only add another dimension to the Tongariro National Trout Centre, it will also allow the “Taupō for Tomorrow” education programme to flourish further.”

Ngāti Tūwharetoa representative Te Ngaehe Wanikau said this type of project highlights when we find our common ground we work really well together. We all have lots of differences but when we find that thing that unites us, like the whio, we can do great things.

He said the facility was testament to collaboration between many.

The ‘boot camp’ hardening process is so that the whio ducklings learning the skills needed to swim and feed in a fast white water environment before they are released into the wild. The Isaac Conservation and Wildlife Trust in Christchurch was the only whio hardening facility in New Zealand until yesterday.

“The facility is a huge asset and means whio from the North Island captive breeders don’t  have to be transferred to South Island for hardening, before being transferred north again for release,” said DOC National Whio Recovery Group Leader Andrew Glaser.

“Today marks a major milestone in the battle to secure and recover our whio population. It’s whiotastic!”

The whio ducklings released today came from the Isaac Conservation and Wildlife Trust’s first two captive clutches for the season, and this season is shaping up to be a bumper for whio ducklings.

Numbers of ducklings already hatched in the wild around the country are being reported as significant, and in the Tongariro Forest security site a census last week reported more than 50 whio ducklings double the best season so far.

Genesis Energy and the Department of Conservation have partnered together in a five year programme to secure the future of this unique vulnerable native bird.

Operating under the name of Whio Forever this partnership is fast tracking implementation of the national Whio Recovery Plan to protect whio and increase public awareness.

The ‘boot camp’ aviary has been funded by DOC, Genesis Energy and the Central North Island Blue Duck Charitable Trust.

The project involved the conversion of an old water raceway at the trout centre. It will provide a safe environment for young whio to develop their white water skills prior to release into the wild. The construction used local engineers and contractors with many hours pro-bono.  Department of Corrections inmate labour was also valuable in completing the construction, providing painters and labourers to carry the tonnes of rocks and sand involved. 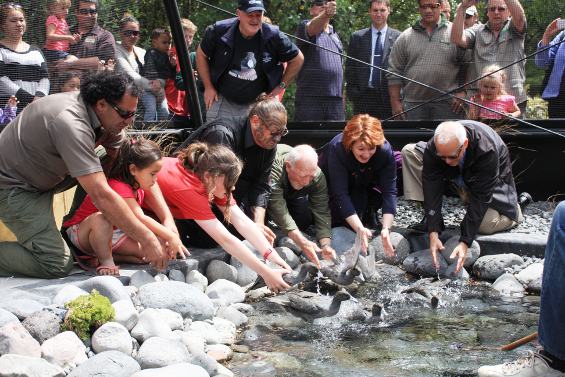