Media releases and updates about the whale stranding in Golden Bay.

A search of beaches by DOC rangers and Project Jonah members this morning has found no sign of 45 pilot whales refloated off Puponga yesterday.

DOC Takaka Conservation Services Manager John Mason said this was an encouraging indication the whales may have moved safely into deeper water and possibly out of Golden Bay.

“We have searched the area of Farewell Spit where they stranded over the weekend and the beaches between there and Collingwood and not found the whales stranded on the beaches which is good news.

“We are optimistic they may have swum out to sea but they could still be in the bay. If anyone does see the whales we ask them to call the DOC emergency number 0800 DOCHOT/0800 36 24 68 to let us know.”

Mr Mason said if the whales were still in the bay there was a risk they could re-strand.

Forty-six whales were refloated yesterday morning with the help of more than 100 volunteers, from Project Jonah and others who came from surrounding areas to assist. One of the whales was found dead this morning on Farewell Spit.

Mr Mason said DOC was extremely grateful for all the help given by Project Jonah volunteers and the dozens of other people who assisted with the whales over the past 3 days.

After the whales were refloated yesterday they had swum strongly out into deeper water but in the afternoon remained in fairly shallow water off Farewell Spit and were still there when rescuers left for the day.

The large pod of around 62 pilot whales stranded at Farewell Spit this morning were successfully refloated out into deep water by DOC rangers, Project Jonah volunteers and members of the public this afternoon.

Most are now swimming in deeper water towards the other side of Golden Bay and it is hoped that they would continue further out into the bay.

Around six to eight whales remained close to Farewell Spit and are being monitored by DOC rangers in a boat. It is too early to say yet whether or not the rescue effort would be fully successful.

Approximately 60 whales have restranded over night on the high tide line.

Anyone who is able to help with a reflot should report to Triangle Flats at 12:30 pm today.

If you are responding please take with you a wetsuit (if you have one), plenty of food and water, warm clothing and sun protection.

Fifty pilot whales are now stranded near the base of Farewell Spit, with a further six currently swimming offshore.

The 40 whales refloated this morning off the base of the Spit have now re-stranded and  have been joined by another 10 whales.

DOC rangers, Project Jonah volunteers and others are keeping the whales as comfortable as possible and wet with buckets of sea water until dark when rescuers will leave the area for the night.

DOC Takaka conservation services manager John Mason said the whales should come afloat in the midnight high tide and could move. He said it was hoped they would find their way safely out to sea once afloat but some or all might re-strand.

DOC rangers will be out at first light to look for the whales.

The eight whales we have been trying to get safely back to sea have re-stranded this morning, not unexpectedly.

They have been able to get out to sea several times but have shown no inclination to do so.

They are now stressed and in poor condition.

DOC has made the difficult decision to euthanise them rather than prolong their suffering.

DOC rangers and Project Jonah volunteers have worked hard through the day to keep eight whales refloated off Farewell Spit this morning from re-stranding.

After the whales were refloated mid-morning rescuers formed a human chain to nudge the whales out into deeper water. Rescuers moved them a long way out from shore in the receding tide and prevented them re-stranding in that area again. The whales began swimming in deeper water along the coastline early this afternoon being monitored by DOC rangers in a boat and from shore.

Low tide was around 4pm and it is hoped the deepening water of the incoming tide will help keep the whales from stranding. 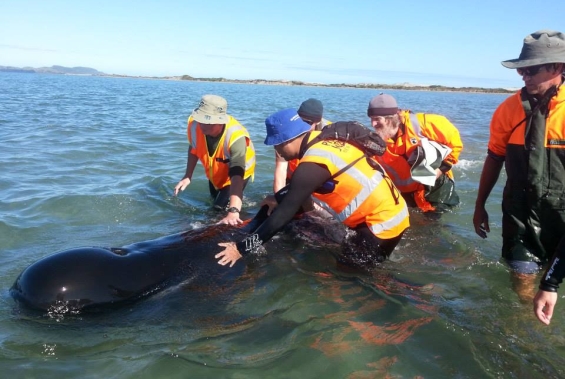 The eight surviving whales stranded on Farewell Spit have been refloated by DOC rangers and volunteers this morning but the whales are still milling around in the sea not far from shore.

There are concerns the whales could re-strand in the outgoing tide. Should the whales start to become at risk of re-stranding, rescuers will try to deter them from moving towards the shore and encourage them into deeper water.

Thirteen pilot whales initially stranded yesterday, about 7 km from the base of Farewell Spit, five have since died. Volunteers assisting at the stranding at Farewell Spit

Eight of the 13 pilot whales that stranded on Farewell Spit yesterday have re-stranded there overnight. Five whales have died – one yesterday afternoon and four overnight.

DOC rangers with the help of volunteers, many from Project Jonah, will attempt to refloat the eight whales in this morning’s high tide, high tide being shortly after 10 am this morning.

Last night rescuers had to pull out due to fading light around 9.15 pm having got the 12 whales afloat but not having been able to fully get them grouped together and moving out to sea.

The other 50 or so whales in the pod have not been seen since DOC rangers in a boat lost sight of them in choppy sea early yesterday afternoon.

DOC rangers working with more than 40 volunteers tonight got 12 pilot whales stranded on Farewell Spit back floating in the sea but it is uncertain whether they will move off safely into deeper water or might re-strand.

Due to darkness, rescuers had to leave the whales floating but still close to shore around 9.15 pm. Rescuers are now leaving the area.

It is hoped the whales will swim safely further out. Rescuers though were unable to complete the full procedure for successfully refloating whales before darkness fell when it is unsafe for people to be in the sea helping whales. This involves bringing the whales together once floated and getting them moving in a group out to sea.

Many of the volunteers that assisted DOC rangers are trained Project Jonah volunteers and came from the local area and further afield to help. DOC is grateful for their help.

Initially, 13 whales had stranded about 7 km from the base of Farewell Spit around 11 am today but one died this afternoon. DOC rangers in a boat were monitoring another 50 or so whales still out at sea but lost sight of them early this afternoon in choppy seas and their whereabouts are not known.

DOC rangers will be out at first light looking to see if any whales have stranded overnight on the coastline along and south of Farewell Spit.

DOC rangers are considering attempting to refloat pilot whales stranded about 7km from the base of Farewell Spit from around 8pm tonight in the incoming tide. More than than 40 volunteers are assisting, many of them from Project Jonah who have come from the local area and further afield.

One whale died this afternoon and the 12 surviving stranded whales have been kept cool and wet with buckets of sea water by DOC rangers and volunteers.

DOC rangers in a boat monitoring the other 50 or so pilot whales in the pod still at sea lost sight of them in choppy seas earlier this afternoon and their whereabouts aren't currently known.

DOC rangers will be out at first light looking for any whales stranded on the coastline along and south of Farewell Spit.

There are still just 13 pilot whales stranded on Farewell Spit and the Department of Conservation says it has lost sight of the other 50 or so whales in the pod which are thought to be in deeper water and in no immediate risk of stranding.

The stranded whales are about 7 km from the base of Farewell Spit. DOC rangers and around 25 volunteers, both local to Golden Bay and from Project Jonah, are keeping the stranded whales cool and wet with buckets of sea water.

DOC rangers will make an assessment this evening as to whether an attempt to refloat the whales can safely be made before dark in tonight’s incoming tide.

“We will need to assess the sea conditions around 6.30pm to assess whether it will be safe to have people in chest-deep sea water attempting to refloat the whales in this remote location.”

The whales would need to be refloated before dark when it is unsafe for people to work in the sea trying to refloat the whales.

DOC rangers had been following the whales still at sea in a boat but lost sight of them in the choppy sea.

DOC staff will be out at first light tomorrow morning looking for any whales stranded on the coastline along and south of Farewell Spit.

DOC rangers monitored the whales after being alerted to them close to shore off Taupata Point, south of Farewell Spit, shortly before 8am this morning. The whales began to strand around 11am.

DOC called for the help of Project Jonah volunteers to assist with the stranded whales and says no further volunteers are needed at this time.

Around 13 pilot whales have this morning stranded near the base of Farewell Spit and the Department of Conservation is trying to prevent another 50 or so in the pod stranding.

DOC has been monitoring the whales since being alerted to the pod of about 60 whales close to shore off Taupata Point, south of Farewell Spit, shortly before 8am this morning. The first whales stranded on Farewell Spit around 11 am.

DOC is using a boat to try to shepherd the whales still afloat out to sea to avoid their also stranding.

DOC has called for assistance from Project Jonah volunteers to help with the stranded whales and says currently no other volunteers are needed to assist.

DOC Takaka ranger Greg Napp said the Project Jonah volunteers will assist DOC staff to care for the stranded whales and do what they can to protect them from the sun and would also help DOC staff attempt to refloat the whales before dark tonight.

“We plan to attempt to refloat the stranded whales in the incoming tide tonight. We are hoping we can get them afloat and further out to sea before dark when it would become unsafe for people to work in the sea trying to refloat the whales.”

This latest stranding follows 39 pilot whales stranding near the base of Farewell Spit just over a week ago on Monday 6 January.  Twelve whales had died and the remaining 27 were euthanised to relieve their suffering after it became clear an attempt to refloat the whales and get them safely back out to sea would be unlikely to succeed.

Why do marine mammals strand?