The Tongariro Taupō community celebrated conservation and those individuals and groups recognised as outstanding in acting for nature on Friday night at the new DOC Taupō office. 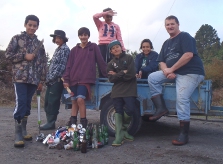 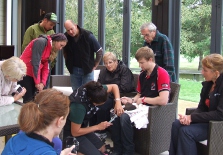 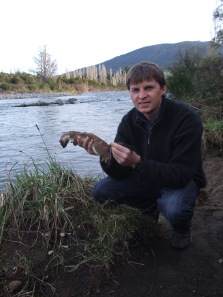 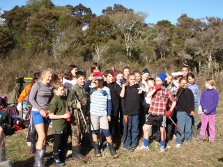 The Hilltop School Weedbusters on ground cleared of weeds at Oruatua

The Tongariro Taupō community celebrated conservation and those individuals and groups recognised as outstanding in acting for nature on Friday night at the new DOC Taupō office.

The new Tūroa te Ao – Act for Nature Awards were presented at the end of Conservation Week to recognise excellence in conservation locally.

Te Awa o Waitahanui received the community conservation group award for being kaitiakitanga for the Waitahanui river, and taking care of the awa with respect and hard work. The group of ten Māori youth between the ages of five and 15 years are being mentored by David Cade, also known as Didymo Dave. The youth are predator trapping, weeding, picking up rubbish and advocating for the Check Clean Dry campaign.

“We were impressed with how much this small group has achieved for conservation in only a year and a half. There are also social benefits from this project such as the rising mana of the youth involved, and the momentum and pride gathering in the community,” said judges Colin Paton of the Tongariro Taupō Conservation Board and DOC Partnerships Manager Natasha Hayward.

Wairakei Golf + Sanctuary was awarded the business conservation award for providing a local sanctuary, experiences and advocacy for conservation. The building of a predator proof fence around the golf course in 2011 is enabling DOC to crèche kiwi chicks until they reach a stoat proof weight, before being returned to the wild. This also provides opportunities for local volunteers and school children to experience kiwi up close and personal, and to learn how they can help kiwi.

The individual leadership conservation award went to Nick Singers, described as a visionary and an inspiration to multiple community conservation projects, who also lends his technical expertise. Project Tongariro president Paul Green nominated him said, “Nick’s enthusiasm, knowledge, skills and ability to identify both resources and funding sources significantly aids the conservation projects he assists with”.

Hilltop School Weedbusters won the school conservation project award for hard physical labour in weed busting, and re-planting natives in the Oruatua Conservation Reserve. The students are weeding broome and cotoneaster and are also moving the piles of weeds off site so they don’t re-grow, areas cleared have been replanted, watered and protected from pests like rabbits. Next year the technology class are going to design tree protectors to keep the rabbits out.

“The impact and pride of this project for the school has seen the project adopted into the Hilltop year seven and eight  syllabus, with a two year programme, designed around a new intake every year, ” says Shirley Potter, Oruatua resident and conservationist.

Project Tongariro presented a memorial scholarship to Massey University student Mathew Dickson for his studies towards a Masters of Science in Ecology, towards his thesis researching carbon sequestration in tussock grassland.