On Sunday 30 March 2014 one hundred Duvaucel's geckos were released on Motuihe Island in the Hauraki Gulf Marine Park.

One hundred of New Zealand's largest geckos are leaving the Mercury Islands to find a new home on Motuihe Island, just 16 km from downtown Auckland. 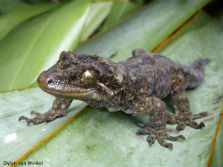 This Sunday (30 March 2014), Duvaucel's geckos will join other threatened wildlife already on Motuihe in the Hauraki Gulf Marine Park, as part of an ecological restoration programme being implemented by the Motuihe Trust with the support of Iwi and the Department of Conservation.

Duvaucel's geckos were once found throughout New Zealand's mainland and are now mostly confined to off-shore islands. Growing up to 30 cm in length and weighing up to 120 grams, New Zealand's largest lizard is also amongst the world's largest geckos. They live in the forest and are mostly nocturnal, feeding on insects.

The Motuihe-bound geckos will be captured by a team of ecologists at Stanley Island - a Department of Conservation nature reserve in the Mercury Islands Group, located off the Coromandel Peninsula, before being transported to Motuihe, a safe haven for our native wildlife.

Other iconic species that are thriving as a result of translocation to Motuihe in recent years are tuatara, little spotted kiwi, kakariki, whitehead, saddleback, shore skinks and common geckos.

Historically the island was settled by Maori and then farmed by Europeans for over a century. Volunteers of the Motuihe Trust have since been working hard to re-vegetate the island; more than 100 ha have been planted with over 350,000 native trees. Invasive weeds have largely been brought under control. Rats, cats, rabbits and mice were eradicated from Motuihe and the island has been free of introduced mammalian pests since 2004.

Geckos play an important role in ecosystems as predator and prey, as well as dispersers of seeds and pollinating plants. Duvaucel's geckos are nationally "At Risk" and by reintroducing these animals to Motuihe, the long-term survival of Duvaucel's gecko will be further assured.

Because Motuihe Island is a recreation reserve which is open to public visitation by ferry, the return of Duvaucel's geckos also creates a unique opportunity for New Zealanders to learn about and experience our endemic reptiles first-hand.