Seeing a kiwi was a reward for a class of Hilltop School Weedbusters in Taupō during Save Kiwi Month.

Seeing a kiwi was a reward for a class of Hilltop School Weedbusters at the Wairakei Golf + Sanctuary during Save Kiwi Month on Tuesday.

The class is one of three year 7 and 8 classes undergoing a conservation project at Oruatua Reserve, removing weeds by hard physical labour, and planting native trees.

Student Catherine Seastres after seeing her first kiwi said, "My dream would be to have kiwi roaming freely without the danger of pests in the Oruatua Reserve where Team 5 and I are weed-busting."

The juvenile kiwi Macrame reached the stoat-proof weight of 1.2 kg within the predator fence at Wairakei Golf + Sanctuary. Later that day, in the presence of more children, he was released back into the Kairoi Rahui in the Rangataua Forest on the southern side of Mt Ruapehu.

Macrame’s BNZ Operation Nest Egg (ONE) journey has now come full circle. He was lifted as an egg from Rangataua last October, hatched at Rainbow Springs Kiwi Encounter, crèched at Wairakei, and now returns to the wild with a much higher chance of survival. Kiwi at the weight of 1 kg and over can use their strong legs to defend themselves against stoats and weasels.

'Don’t let our kids grow up without kiwi' is the theme for the 2014 Save Kiwi Month, which extends through October. Michelle Impey of Kiwis for kiwi explains, "Currently, 95% of kiwi chicks die in the wild. If nothing is done, our children could be the last generation to see kiwi in their natural habitat."

Save Kiwi Month is the national fundraising campaign led by Kiwis for kiwi which raises funds to protect kiwi and their habitats. The funds support on-the-ground initiatives led by community groups, including predator control, BNZ ONE, and education and advocacy programmes. The goal is to reverse the decline of kiwi by 2018 and see an increase in kiwi population in the future.

Donate to Kiwis for kiwi 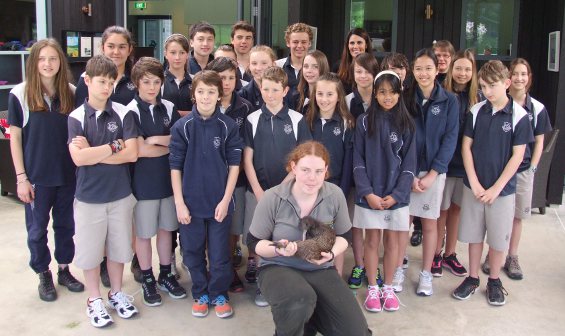