7 May 2014The Department of Conservation (DOC) are to increase takahē numbers in Cape Sanctuary, Hawke’s Bay, four-fold due to a transfer of six birds this Thursday 8 May.

The Department of Conservation (DOC) are to increase takahē numbers in Cape Sanctuary, Hawke’s Bay, four-fold due to a transfer of six birds this Thursday 8 May.

The move has been made possible thanks to the large-scale wildlife restoration initiative of three farming families on Cape Kidnappers peninsula. In 2007 these families constructed a predator proof fence across the base of the peninsula and have since undertaken intensive predator control within the 2500 ha area.

Following the successful introduction of an initial pair in 2012, the birds—including Puiaki, who was named as a result of a nationwide Mitre 10 Takahē Rescue competition last year—will be released into a 135ha enclosure within the main sanctuary. 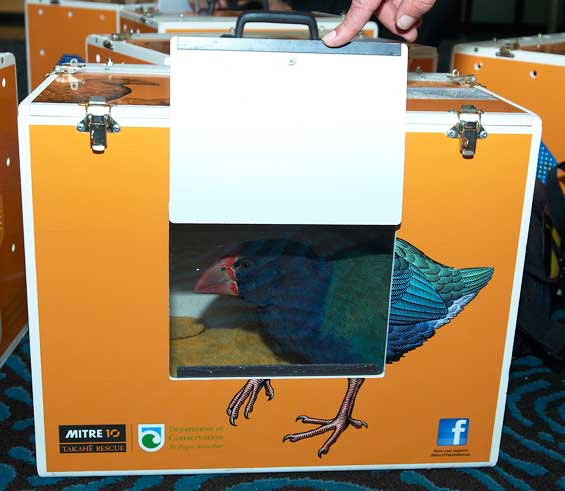 DOC takahē ranger Phil Marsh says it might seem odd sending a bird whose only remaining wild population is in the mountains of Fiordland, to an east coast peninsula. However fossil remains of the North Island takahē (now extinct) have been found near the area where the three pairs will be released.

“Cape Sanctuary provides DOC’s Takahē Recovery Programme with a great opportunity to test whether the birds can do well in a less hostile environment, without supplementary feeding and with low levels of predators,” says Phil Marsh.

“If they thrive and breed, more birds can be trialled in the larger 2500ha area behind the main peninsula fence.  All going well Cape Sanctuary could eventually hold about 23 pairs of takahē and become a major stronghold for the critically endangered birds.”

“Through our partnership with Mitre 10, it is our goal to have at least 125 breeding pairs in secure populations across New Zealand,” adds Phil Marsh.

“To achieve that we need to test and build populations at new sites and move birds to maintain a genetically healthy population.”

Landowner, Andy Lowe, is thrilled  and privileged to be receiving three more takahē pairs at Cape Sanctuary.  “It is our long-term vision to be able to contribute significantly towards seeing numbers of this species climb upwards and for takahē to no longer be endangered.”

Eight takahē will be taking to the skies this week—six from Burwood Bush Takahē Rearing Unit, near Te Anau, to Cape Sanctuary and two young birds from Maud Island to the rearing unit—as part of DOC’s partnership with Air New Zealand helping to transport endangered species to sites around the country.

“Though naturally flightless, most takahē get to fly courtesy of Air New Zealand at least once in their lifetime,” says Phil Marsh.