Signed Memorandum of Understanding signals start of a new relationship

A Memorandum of Understanding (MOU) has been signed between the Owhango Residents and Ratepayers Incorporated Society (ORRIS), the Department of Conservation (DOC) and the Ruapehu District Council (RDC).

As a forerunner to the recent Pest Control Operation undertaken in the Tongariro Forest Conservation Area, a Memorandum of Understanding (MOU) has been signed between the Owhango Residents and Ratepayers Incorporated Society (ORRIS), the Department of Conservation (DOC) and the Ruapehu District Council (RDC).

The signing of the MOU between ORRIS, the RDC and DOC established an agreed process for the Tongariro Conservation Area ongoing pest control programme within the Owhango water catchment area; the maintenance of a pesticide free water supply for the Owhango community; provision for the community to be actively involved in the monitoring of pest control operations and ensuring that the ecological values of the Tongariro Forest are maintained and enhanced. 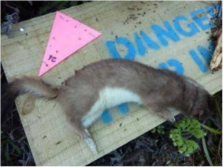 The successful outcome was achieved through the acknowledgement of alternative viewpoints, presentation of a range of methodologies to effectively manage pests, conducting constructive conversations and making collective decisions. An example of this is the Department’s decision to use trapping to control pests in 164 hectares of the Owhango water catchment area rather than aerially and ground applied pesticide.

RDC Chief Executive, Peter Till, said of the signing of the MOU, “the original agreement was the first of its type between a community, DOC and the local territorial authority on the use of 1080 for pest control in a water catchment area. We would all like not to use poisons such as 1080 but at this point it is still the most practical, efficient and cost effective tool for managing invasive pest species such as stoats, ferrets and possums which also pose a bovine tuberculosis (TB) threat to cattle.”

RDC Councillor, Elaine Wheeler, who chaired the signing of the MOU on behalf of the RDC, commended all the signatories for the way they worked through the issues and achieved a working agreement. “The MOU will assist in ensuring that all the parties continue to discuss the issue rationally by bringing them together every two years to confer over the pest control methods and technology to be utilised.”

“Consulting with the community was a key component to the successful completion of the pest control operation. It was apparent to DOC that there were concerns in the Owhango community about the operation. By engaging directly with residents and signing the MOU we were able to address many of their concerns,” said DOC Biodiversity Conservation Services Manager Tongariro, Bhrent Guy.

Jono Maxwell, Conservation Partnerships Manager, said of the MOU, “this really is a key point in the relationship between the Department and the residents of Owhango. We were able to overcome many of the historical issues that have led to a stalemate in the relationship and establish a real platform for all parties to move forward together.”

ORRIS who were signatories to the MOU stated that they were pleased that the original MOU from 2002 had been updated and re-instated, and that the long term objective was still to phase out poison in the water catchment area and to further reduce the total amount of each application. They also stated that they were satisfied that the application was carried out as planned and that water samples for monitoring the Owhango water supply were taken with precision and care. They were also supportive of the mitigation measures that were put in place such as the provision of an additional water supply in the village.

ORRIS stated further that they look forward to continued and increased community activity in the feedback process and the independent monitoring being carried out in the catchment area. They also look forward to a complete report back via the Owhango working group in October/November and a critical review in March 2015.

Overall the cooperation between all parties has been a key to success. The signing of the MOU sets a clear path for all signatories to adhere to and provides clarity to each signatory’s role and responsibilities. The purpose of the pest control operation, which was conducted in August 2014, was to protect some of New Zealand’s threatened species, particularly kiwi and whio (blue duck) as well as helping to prevent the spread of TB.