The Department of Conservation is condemning the shooting of a New Zealand fur seal/kekeno found on a beach on Stewart Island and is asking for public help to find who is responsible.

The Department of Conservation (DOC) is condemning the shooting of a New Zealand fur seal/kekeno found on a beach on Stewart Island and is asking for public help to find who is responsible.

DOC acting Conservation Services Manager for the Southern Islands, Jo Hiscock, said the dead seal was found by trampers on Smokey Beach at the northern end of Stewart Island on 18 September and it appeared to have been shot at close range. The adult male seal had a single hole in its side, suggesting it was shot with a rifle. 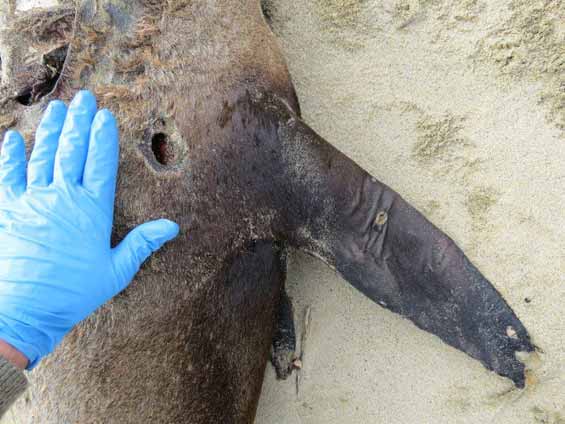 This is the third seal shooting since May this year. A critically endangered New Zealand sea lion/whakahau washed up at Deadmans Beach, Stewart Island in April this year. This young male sea lion was sent to Massey University for an autopsy, revealing he was shot twice with a high powered rifle. Another sea lion was shot at Port Adventure, Stewart Island, in June last year.

A seal was shot in Napier in July this year and two seals were shot on the Kaikoura coast last year.

DOC investigations into these cases have so far failed to identify the culprits.

Ms Hiscock said the trampers who found the seal on Stewart Island last week were upset as it was obvious that it had been shot and they couldn’t understand why someone would commit such a senseless killing.

“It’s deeply disappointing that someone would deliberately and callously shoot a fur seal like this. Thankfully, most people respect seals and appreciate seeing them on our coast,” she said.

“This incident and recent seal and sea lion shootings in other parts of New Zealand have highlighted that we need the public to help us safeguard vulnerable marine mammal species. New Zealand fur seals are protected by law and it is an offence to kill or harm them.”

Anyone charged under the Marine Mammals Act with harassing, disturbing, injuring or killing a seal faces a maximum penalty of two years’ imprisonment or a fine to a maximum of $250,000. The penalties were increased last year.

Anyone with information on this or any other seal shootings or attacks is asked to contact the local DOC office, 0800 DOC HOT (0800 362 468) or the police.

How to watch seals safely

When to call DOC about a seal

Once fur seals lived and bred right round the coast of New Zealand. But they were hunted for more than 700 years, first by Māori and then from the 1790s by European sealers.

Sealing was finally banned in 1894. Since then their numbers have been rising and gradually fur seals have been re-colonising our coastline.