The chances of long-term survival for the Pacific gecko have been boosted with the release of 54 of the threatened native reptiles in Auckland’s Hauraki Gulf.

The chances of long-term survival for the Pacific gecko have been boosted with the release of 54 of the threatened native reptiles on pest-free Motuihe Island/Te Motu-a-Ihenga in Auckland’s Hauraki Gulf/Tīkapa Moana.

Pacific geckos have joined other endangered native wildlife released on Motuihe as part of an ecological restoration programme run by the Motuihe Trust in partnership with iwi and the Department of Conservation (DOC).

Since it was declared pest free in 2004 – with the removal of rats, feral cats, mice and rabbits – Motuihe has become a reptile haven. The Pacific geckos join Duvaucel's geckos, common geckos, shore skinks and tuatara previously released on the island. 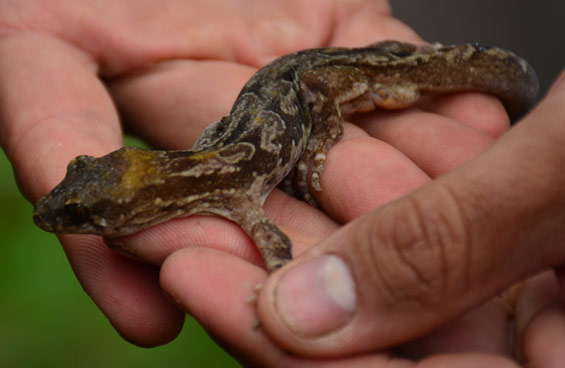 Pacific geckos were once common throughout New Zealand, but have been largely driven off the mainland by predators such as rats, mice and feral cats and loss of habitat. They now rely on pest free islands for their survival.

"We're excited to return this threatened gecko to Motuihe so that visitors to the island can see these special animals in their natural environment," says John Laurence of the Motuihe Trust. "Geckos are an important part of island ecology, dispersing seeds and pollinating plants."

"It's hoped this new population on pest-free Motuihe Island will breed and thrive, says Keith Gell, DOC's Auckland Conservation Services Manager. "We're pleased to be working with iwi and the Motuihe Trust to bring Pacific geckos to Motuihe, and help secure the long-term survival of the species, currently classified as 'At Risk'."

The geckos released on Motuihe are from Tarahiki (Shag) Island, a small island south of Waiheke that is owned by the Ngāti Pāoa Trust Board. Tarahiki Island has been free of introduced predators for more than 20 years and is important habitat for a number of reptile, seabird and invertebrate species.

Pacific geckos live in native forest and shrubland habitats, particularly in coastal areas. They are mostly nocturnal and feed on insects, fruits and nectar. The 54 Pacific geckos were released into an area of original native bush on Sunday December 7 and quickly took shelter in the bark of pohutakawa trees.