The reward period for sighting information leading to the capture of an invasive pest bird – the red-vented bulbul – has ended without anyone qualifying for the payout.

The reward period for sighting information leading to the capture of an invasive pest bird – the red-vented bulbul – has ended without anyone qualifying for the payout.

Red-vented bulbuls, originating from Asia, can cause significant damage to fruit and vegetable crops and are known to chase and attack other birds.

The Ministry for Primary Industries (MPI), Department of Conservation (DOC) and Auckland Council are working together to track and eradicate the red-vented bulbul which is confirmed to be in Auckland.

A reward of $300 was offered on October 10 last year. It was increased to $1,000 on November 13. The reward was on offer to anyone who provided information leading to the capture of a red-vented bulbul by the response team working to eradicate this pest bird. The reward period ended at midnight on Friday February 28.

"The reward offer was successful in raising awareness that red-vented bulbul are present in Auckland," says DOC spokesperson Liz Brooks. 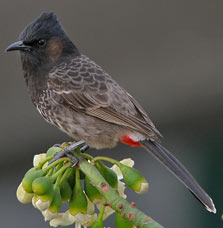 The response team estimates there are at least five red-vented bulbuls in Auckland, based on confirmed sightings last year. It's most likely that they arrived by ship or yacht. They have been present in Auckland twice before and were successfully eradicated both times.

"Our response team believes there are still red-vented bulbuls in Auckland but they've 'gone to ground'. This is what happened last time these birds were in the city, but we did eradicate them," says Liz Brooks.

Red-vented bulbuls are easy to spot. They are a medium-sized bird, around 20 centimetres in length, about the size of a starling. They have a black head, a dark back, grey-white belly, and a distinctive crimson-red patch beneath their tail.