The Department of Conservation is reminding owners to control their dogs after a New Zealand fur seal pup died from a dog attack on a Gisborne beach this week.

The Department of Conservation is reminding owners to control their dogs after a New Zealand fur seal pup died from a dog attack on a Gisborne beach this week.

At this time of the year seals come ashore to rest and this death is a reminder to keep dogs under control at all times, says Conservation Services Ranger, Jamie Quirk.

Mr Quirk says a pathology report on the seal, received from Massey University, confirmed a dog attack caused its death.

“The autopsy confirmed severe haemorrhage and tearing around the head and throat consistent with a dog attack. There was also a skull fracture the result of partial penetration by the dog’s tooth causing extensive bleeding in the brain.”

Mr Quirk says he understood a member of the public had reported to the New Zealand Police after seeing two men earlier this week attempting to remove a dog from a seal. The men and dog left Midway beach and were last seen driving away in a silver station wagon.

“We are interested in receiving any information from the public about the identity of the two men and their dog,” says Mr Quirk. “We had a similar incident two years ago and dog attacks seem to becoming a regular occurrence.” 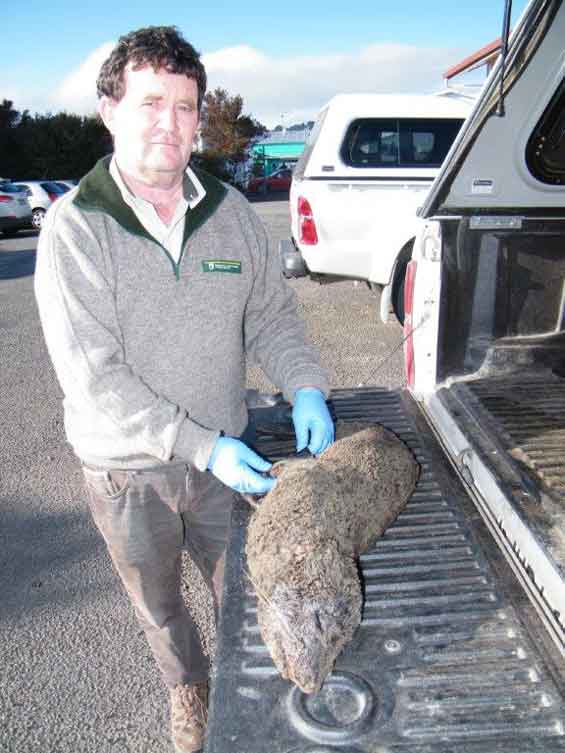 Jamie Quirk, Ranger Services with seal before it was sent to Massey University for autopsy

An uncontrolled dog in a public place is also taken seriously by the Gisborne District Council under the Dog Control Act 1996. Penalties for owners are severe if a dog is found annoying or disturbing wildlife.

“At this time of year beaches are controlled freedom areas, dogs must be under visual and oral command, if you have not got strict control over your dog by these means, put it on a lead” says Gisborne District Council’s Team Leader Animal Control, Steve Greaves.

The public are reminded if you find a seal that is severely injured, entangled in marine debris or being harassed by people or dogs, call the DOC Hotline 0800 362 468.