Public asked to look for entangled whale off Otago coast

The Department of Conservation (DOC) is appealing to the public to look out for a humpback whale entangled in rope following a sighting off Taiaroa Head yesterday.

The Department of Conservation (DOC) is appealing to the public to look out for a humpback whale entangled in rope following a sighting off Taiaroa Head yesterday. 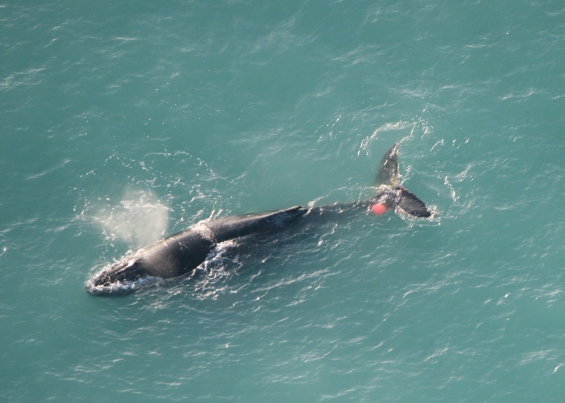 DOC Coastal Otago Conservation Services Manager, David Agnew, said the rope was wrapped around the 12m-long whale’s body, across its back behind the blowhole, disappearing below the pectoral fins.

“We want people to let us know if they see the entangled whale and we will attempt to disentangle it from the rope if we can,” David said.

“We have a specialist team of DOC staff trained in whale disentanglement techniques who will travel from Kaikoura to attempt to cut the line from the whale if it’s seen and it’s safe to do so.”

The procedures for cutting whales free from entanglement can be slow and take several hours. For safety reasons, it requires favourable sea conditions and sufficient daylight hours. Anyone who sees the whale shouldn’t attempt to cut the rope entangling the whale. It’s dangerous and can make it more difficult for the specialised team to carry out the disentanglement procedure for freeing the whale. Boaties should also take care not to get close to the whale or do anything else that could disturb or harass it as this would also make the team’s job harder.

David said the whale is expected to be moving southwards down the Otago/Southland coast. They can travel up to 100km over 24 hours. Humpback whales migrate south at this time of the year and there will be limited chances to intervene once it is south of New Zealand. Rope around the head of a humpback whale

DOC has staff based in Kaikoura who are specially trained in techniques for cutting free entangled whales using specialised equipment.

The trained team have carried out the disentanglement procedure on whales before with some success in cutting away rope, floats and craypots to free whales.

The procedure is called kegging and involves using grapnel hooks to attach rope and floats to material entangling a whale to slow it down and tire it out. When the whale is sufficiently exhausted, the disentanglement team edge along the rope toward the whale. When they are close enough to the whale, they reach over with a long pole and curved knife to cut the material entangling the whale.

People should never attempt to free whales themselves but should contact DOC to respond.

Humpbacks are baleen whales meaning they filter their food through a series of baleen plates, instead of teeth. They can grow up to 16 metres and weigh up to 50 tonnes making them one of the largest of the ocean’s mammals. Despite their large size, they are incredibly agile, able to leap right out of the water, much to the delight and awe of anyone fortunate enough to witness their acrobatic displays. They are also beautiful singers.