Pest control may be last chance for Waikaia mohua

The recent rediscovery of threatened mohua/yellowhead in Waikaia Forest, northern Southland, means a pest control operation planned by the Department of Conservation (DOC) soon is essential. 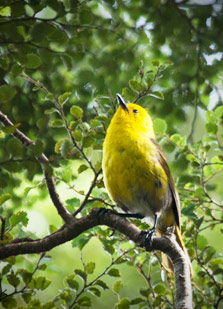 The mohua / yellowhead was recently rediscovered in Waikaia Forest

DOC Catlins services ranger Cheryl Pullar said consent by Environment Southland for the drop had been granted and they expected it to go ahead in August or September.

Ms Pullar said the sighting of mohua last year surprised DOC staff as they thought the birds had disappeared from this area during the last beech mast in 2000. This year's beech mast means rats, mice and stoats could reach damaging levels again by summer.

DOC scientist Graeme Elliott said if pest control was not carried out in Waikaia forest, mohua would completely disappear from the area forever.

"This may be the last opportunity to protect them and recover this population," Mr Elliott said.

Mohua were once common in Southland but now lived only in fragmented populations.

"They've already gone from patches of bush around Southland and this year's beech mast will finish them off in Waikaia if we don't control the rats, mice and stoats," Mr Elliott said.

"Pest control will allow this population of mohua to recover to similar levels of those in the Catlins, where flocks of dozens of mohua are visible, especially along the upper end of the Catlins River Walk."

Ms Pullar said DOC was in the planning stages of the aerial drop which would cover just under 7000 hectares of the Waikaia Forest in northern Southland, as part of the national Battle for our Birds operation. Ms Pullar and other staff have been consulting with the local community on the operation.

Silver beech in the area were masting heavily and tracking tunnels by DOC to measure the density of rats showed there was a rise in the population, Ms Pullar said. When the seeds ran out, rats and stoats would target native species, including mohua.

DOC planned and delivered these operations carefully to ensure aerial sowing of 1080 was accurate.

Up to two weeks before the aerial 1080 operation a pre-feed operation will be carried out using non-toxic baits dropped over the entire block at about 1kg per hectare. The pellets containing 1080 will be distributed about a week later. The 1080 is biodegradable and disperses quickly in water to non-toxic levels. The pellets will contain deer repellent to control by-kill.

Conservation Minister Nick Smith recently confirmed Battle for our Birds operations would be carried out in 29 forests throughout the country this year, covering 700,000 ha by November. Another 14 forests covering 200,000 ha were on "close watch". 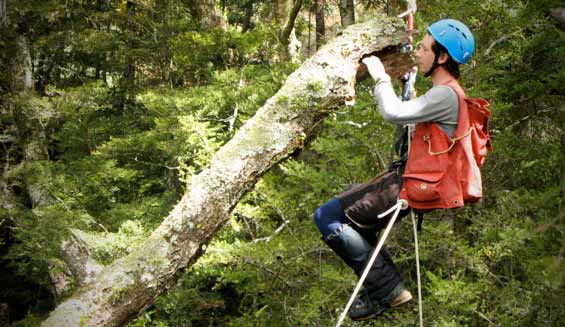 Officially listed as "nationally vulnerable", mohua are extremely susceptible to predation by rats and stoats as they nest in holes in trees.

Other endangered species in the Waikaia such as long-tailed bats/pekapeka, robins/kakaruai, yellow-crowned parakeet/kākāriki, hectors tree daisy, large land snails and peripatis/velvet worms will benefit from the operation.