Sarah and her Dad Scott will spend four days in the Central North Island in late January being hosted by the Department of Conservation (DOC) whio recovery team as Sarah’s prize in this year’s Conservation Week Whio Forever competition.

More than 600 entries were received for this year’s Conservation Week online 'Find a whio' competition and Sarah was excited to get the news of her win this week.

In her entry Sarah said she would love to see Whio in the wild!

“I love birds and have four pet budgies that I hope to breed. I have volunteered at Pukaha Mt Bruce a few times and plan to do more, it’s awesome!” she said.

Sarah already has conservation values as demonstrated in a Youtube video she created to demonstrate how farmers can protect the river systems.

Genesis Energy and DOC have partnered together in a five year programme to secure the future of this unique vulnerable native bird. Operating under the name of Whio Forever this partnership is fast tracking implementation of the national Whio Recovery Plan to protect whio and increase public awareness. 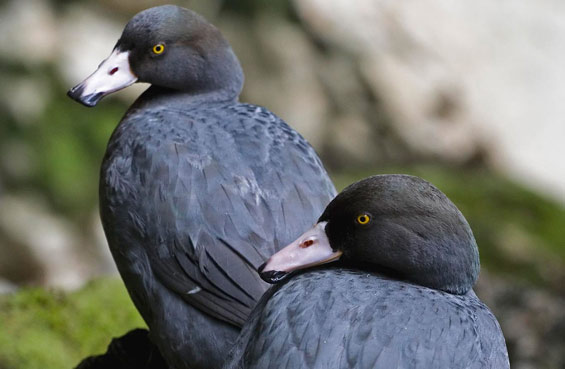 The whio is a threatened species of native duck that is only found in New Zealand’s fast flowing waters. Featured on New Zealand’s $10 note and with an estimated nationwide population of less than 2500 birds, whio are rarer than kiwi.

Whio are adapted to live on fast-flowing rivers so finding whio means you will also find clean, fast-flowing water with a good supply of underwater insects.

This makes whio important indicators of ecosystem health – they only exist where there is high quality clean and healthy waterways.

Genesis Energy has a strong historic association with whio through the Tongariro Power Scheme and in 2010 this association grew through the establishment of Whio Awareness Month (March).

Today, Genesis Energy and DOC continue their partnership through The Whio Forever Programme, which aims to secure the future of whio in the wild and ensure New Zealanders understand and value of whio in our rivers.

The support of Genesis Energy and the work of DOC has enabled the Whio Recovery Plan to be implemented.

The whio are eaten by stoats, ferrets and cats, with the largest impact during nesting time when eggs, young and females are vulnerable, and also when females are in moult and can’t fly.

Extensive trapping can manage these predators and work in key whio habitats by DOC and Genesis Energy on the Whio Forever Project has already seen an increase in whio numbers.

Whio cannot be moved to predator-free islands like other species because of their reliance on large fast-flowing rivers.

Pairs occupy approximately 1km of water – so they need a lot of river to sustain a large population and they fiercely defend their territories, which makes it difficult to put them with other ducks in captivity.

They are susceptible to flood events which, destroy nests, fragment broods and wash away their valued food source.