Otago’s native freshwater fish are facing a crisis as numbers fall steadily largely due to pressure from introduced fish such as trout.

Otago’s native freshwater fish are facing a crisis as numbers fall steadily largely due to pressure from introduced fish such as trout.

Otago has 11 species of threatened native freshwater fish – the most in any area in New Zealand.

A review of threatened fish by a panel of experts appointed by the Department of Conservation (DOC) has moved three species of Otago fish to a higher threat category. The last review was carried out five years ago.

Three species of fish found only in Otago are classified in the highest threat category - “nationally critical”, five are “nationally endangered”, two are “nationally vulnerable”, and one is “declining” (see new classifications below).

DOC’s freshwater ranger for Otago, Pete Ravenscroft, says while these fish face threats from habitat loss, land use changes, barriers to migration, gravel extraction, water abstraction, drain clearing and degrading water quality, the increased movement of trout into new sites is having the most devastating impact.

“Trout habitat is still naturally expanding into new waterways, without human assistance. We thought after 150 years (since trout were introduced to New Zealand) that they would have moved into all possible waterways but their drive to expand continues, to the detriment of our native fish,” Mr Ravenscroft says.

“Based on the current rate of loss, if these ongoing trout invasions continue, at least two of our species (the Central Otago roundhead and the Clutha flathead galaxias) could potentially become extinct in the next 20-30 years. We’ve really only got two secure populations of Central Otago roundhead galaxias in Otago. Something has to be done now to prevent future losses.”

“In the last 13 years, 20 percent of Otago’s populations of rare fish have been lost and 60 percent of Clutha flathead populations have gone. These losses are alarming. There’s room for everyone – galaxias, trout and landowners – if we can work together on a solution.” 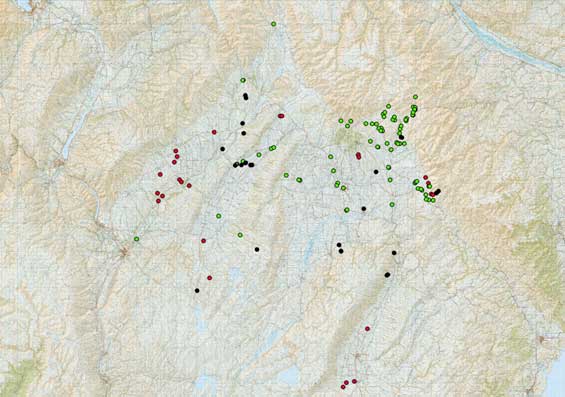 As most galaxias are found in waterways passing through private land, DOC’s freshwater fish team in Otago, led by Mr Ravenscroft, has been working with Fish and Game, Otago Regional Council, water user groups, landowners, iwi and the community in areas with threatened galaxias to remove trout, install barriers to prevent future trout movement, protect habitat, and improve water quality and fish passage.

“We are encouraged by the regional council’s active management of these fish, which can be outside the normal consent conditions. Without the support of all these parties, even more of these fish would have disappeared. Groups such as the Kyeburn Water Users Group are working alongside DOC to ensure the long-term security of their precious Central Otago roundhead galaxias.”

DOC has also undertaken a review of its three freshwater fish recovery plans and groups to assess where there have been improvements, gaps and what more could be done.

But a lot more needs to be done and it’s a bigger problem than DOC can handle on its own, according to Mr Ravenscroft. Solutions could include installing culverts and manipulating water flows to maintain these populations. The streams that contain these threatened fish are generally small – less than 1m in width – and provide no recreation benefit to anglers.

Freshwater ecologist Lan Pham, the Director of the Working Waters Trust which focuses on education and conservation of endangered galaxiid species, says, "The tragedy is we are losing these incredible species before we even get to know them. These fish have their own unique features and stories and are found nowhere else in the world - they are uniquely Otago. The hope lies in enthusiastic landowners and schools in places like the Pomahaka, Lawrence, Kakanui and the Kyeburn where local communities are deciding to get behind their local species and mucking in to ensure their survival."

New classifications of galaxiid (non-migratory) fish species in Otago and the area they occupy:

Otago is a biodiversity ‘hot-spot’ as it has populations of some of the most threatened galaxiids, species such as the Clutha flathead around Lawrence, the Central Otago roundhead in Ranfurly, the Teviot in the tributaries around Lake Onslow, Lowland longjaw in North Otago, and Eldon’s and Dusky galaxiids in east Otago.

Whitebait make up only five of New Zealand’s 28 species of galaxiids.

Eighty percent of these 28 species are endangered.

Unlike their whitebait counterparts, these galaxiids do not migrate to sea, living out their entire lives in the stream or river where they hatch. Often these few remaining populations have passed under the radar of humans. As freshwater resources come under increasing pressure, these small fish are rapidly disappearing.

Galaxiids were named so by discoverers as the beautiful gold flecks and patterns on their backs look like a galaxy of stars.