Following the Bay of Islands Power Boat Race held in Paihia on 1 March 2014, the Northland Conservation Board is seeking improvements to planning for next year's race to ensure better measures to protect marine mammals in the Bay area.

Following the Bay of Islands Power Boat Race held in Paihia on 1 March 2014, the Northland Conservation Board is seeking improvements to planning for next year's race to ensure better measures to protect marine mammals in the Bay area.

Northland Conservation Board Chair Mita Harris says, "Bottlenose dolphins in the Bay of Islands are listed as nationally endangered. The local population is declining at 7.5% annually and calf mortality is very high at 42%. We cannot afford to lose even just one of these precious mammals." 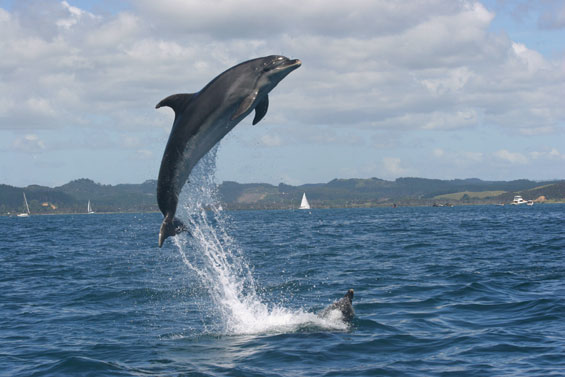 "The Board shares Department of Conservation concerns. High-speed power boat racing in key dolphin habitat inherently creates a significant risk of collision between dolphin and speedboat. The consequences of the animals being exposed to high levels of noise emitted by these vessels are also of concern."

Mr Harris says collisions of vessels with bottlenose dolphins do occur and often result in severe injury to or death of the animal. The variety of effects of noise on whales and dolphins had also been well documented.

"Marine mammals are protected by law. Commercial marine mammal viewing operators generally take due care and they have procedures in place that regulate marine mammal encounters."

"Apart from the obvious need to protect the Bay's marine mammals for conservation reasons, a significant portion of the Bay of Islands' tourism economy is also reliant on healthy dolphin populations frequenting the Bay area."

"As for planning future speed boat races, it would be important to weigh up the risks to marine mammals, conservation efforts, and the local tourism interests against the economic benefits this event brings to the region, and the enjoyment spectators and racers get from the race."

Mr Harris says, "The Northland Conservation Board would like to see all stakeholders in the race develop a coordinated plan that effectively mitigates concerns for marine mammals and racers. This would involve the race organisers working with the Department of Conservation, expert scientific advisers, local tourism operators, iwi and others."

He says that perhaps a different location or time of year could be a simple solution to safeguard marine mammals in the Bay area.

"The Board would recommend that the inclusive planning process for next year's race commences now – as soon as possible. This would allow adequate time for effective measures to be identified and put in place in time. The Board would be happy to offer support in facilitating this dialogue."

Mr Harris says that according to preliminary reports from the Coastal-Marine Research Group, Massey University, bottlenose dolphins (including young calves) were present, as predicted, in and around the race course on race day 1 March. While no incident was observed during the race, it was not possible to rule out the possibility of a boat interaction until post-event monitoring had been completed. This would involve ongoing surveys in the area as well as a full forensic examination of any dolphin carcass that strands over the coming weeks.