Partnerships will be celebrated this weekend with the opening of the new Taupō community conservation complex.

The front entrance to the new Taupō office

Partnerships will be celebrated this weekend with the opening of the new Taupō community conservation complex.

The new Department of Conservation regional office and community whare will be officially opened on Saturday morning by Ngāti Tūwharetoa, in conjunction with the Tauhara hapū, other central North Island iwi and DOC.

The ‘conservation complex’ has been being built on public conservation land between Motutaiko and Kaimanawa Streets, behind Waiora House and will house up to 49 staff. 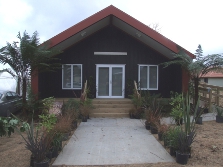 “The relationship the project has forged, fundamentally acknowledges the Tauhara hapū interest in the whenua (land). It’s not about the building it was always about the whenua and this re-sets the cultural context for the future in an environment of courtesy and respect.”

“Today marks the beginning of an improved ongoing working relationship between the parties,” they said.

The sunny deck: another meeting room

Conservation Partnerships Director for the Central North Island David Speirs says DOC has strengthened its presence in the Taupō District by locating the regional hub in Taupō with more than 40 staff to be based here, and this has been achieved while maintaining a local base of operations in Turangi of 17 staff.

“Building and strenghtening relationships are at the core of the way DOC is working today and this new complex is testament to that.

“This is an incredible example of what can be achieved through true partnerships. It shows what can happen when people get around a table and make the effort to understand and listen to others,” he said.

Mr Speirs says that  DOC, Ngāti Tūwharetoa and the Tauhara hapū have set the bar for other organisations and agencies in the district. This is leading the way for other businesses, agencies and organisations to have a place to work and collaborate  together with iwi and hapū for the benefit of the community.

“This project has been about creating a community conservation hub. It has been about finding synergies with other community groups such as Waiora House, about bringing together like minded focussed groups to be able to work together. This is just the start, the first step and there is room for others to join and grow in this area.”

“This project is symbolic of the Department’s long term commitment here in Taupō, we are here for the long haul and want to work with iwi and the community."

He congratulated the working party for their lateral thinking. He described the project and relationship as very progressive, and said it was a very inclusive model, and one that the department would use again.

“The vision was for us to be able to work in an integrated way with iwi. And with a shortage of community buildings here in Taupō this project will not only provide a great working space for our staff but also a whare for iwi and community groups to come together.

“There are exciting times ahead and I look forward to working in the new office space,” Mr Speirs says.