Date:  08 June 2014 Source:  Office of the Minister of Conservation 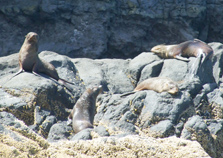 Seals on the rocks nearby the reserve

“World Oceans Day is about recognising the need to better protect marine life and that is what we are doing in creating the Akaroa Marine Reserve,” Dr Smith says.

“This newly protected status is well deserved. The scenery surrounding the reserve is some of the most spectacular coastline anywhere in New Zealand with its huge volcanic cliffs, wild sea caves and unusual sea stacks.

“Some of the hundreds of species that will benefit from the reserve include giant bull kelp, green and horse mussels, sea tulips, hydroids, sponges, sea squirts, sea anemones, cushion, snake and biscuit stars; fish like blue cod, butterfish, blue moki, leatherjacket and white pointer sharks; birds like penguins and shags and marine mammals like fur seals and Hector’s dolphins.”

The 512-hectare reserve covers the south eastern corner of the Akaroa Harbour. The reserve status means all marine life is protected and that fishing and the removal of any living or non-living marine resource is prohibited. Most of the rest of the harbour is managed under a Taiapure established in 2006.

“Akaroa is an iconic harbour and is hugely popular for its recreation, scenery and heritage. The reserve will enhance Akaroa’s growing nature-based tourism and will be an economic as well as an environmental asset for the Banks Peninsula community,” Selwyn MP and Environment Minister Amy Adams says.

“I appreciate that this reserve has been a contentious local issue spanning 20 years of debate. We need to recognise that marine life in the Akaroa Harbour is not as good as it should be and that this reserve is about ensuring it improves for future generations. The next step will be integrating the local management of the Akaroa Taiapure and Akaroa Marine Reserve so the two mechanisms work together.” 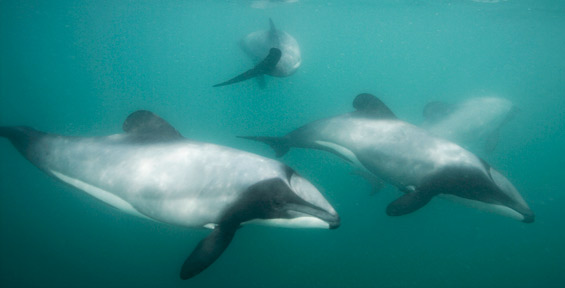 “I wish to acknowledge and thank the 20 years of diligent conservation advocacy by the Akaroa Marine Protection Society for this reserve. The process has not been helped by a clunky and outdated Marine Reserves Act which has been particularly disempowering for the local rūnanga of Ngāi Tahu. New reserves initiated since like at Kaikōura and the Subantarctics have got around the Act and used special legislation. I have a personal ambition to rewrite the 1971 Marine Reserves Act after my experience in Akaroa because I believe we can create a much better process,” Dr Smith says.

“The oceans are the new frontier for conservation. This is the fourth marine reserve the Government has put in place this year and we are on track for a record ten by year’s end. New Zealand needs a representative network of marine habitats in permanent protection just as we have on land,” Dr Smith concluded.