The Department of Conservation’s largest ever aerial 1080 campaign to combat this year’s rat and stoat plague has successfully knocked down predator populations in key target areas.

The Department of Conservation’s largest ever aerial 1080 campaign to combat this year’s rat and stoat plague has successfully knocked down predator populations in key target areas.

Over the last four months, DOC has completed an unprecedented 25 aerial 1080 operations over about 550,000 hectares to combat the biggest beech seed-fuelled rodent plague seen in 15 years.

Rat numbers reached extreme levels at some sites but early results from the Battle for Our Birds 1080 programme show rat populations crashing giving much needed protection to breeding populations of vulnerable native birds and bats. 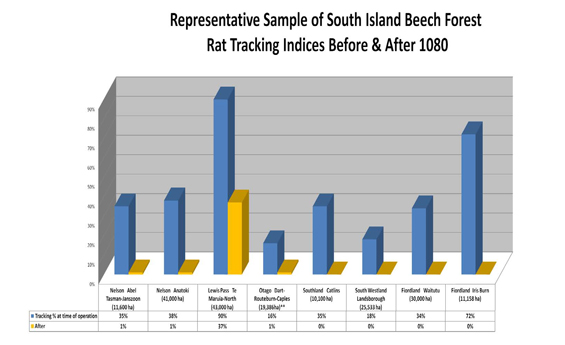 “We know that rats and stoats will inevitably re-invade many areas over time so the war is far from won.”

But these operations will give some of our most vulnerable birds a precious window to raise their young this summer—we’ve already seen record numbers of whio ducklings in parts of the Tongariro Forest where 1080 was used in August.”

Mike Slater says DOC acknowledges that some native birds have also been lost to 1080 through these pest control operations.

“It’s unfortunate to lose any kea but without protection most kea chicks are killed by stoats so the population gains from one good breeding season more than offset the losses of individual birds."

Mike Slater says monitoring teams have also been unable to locate about 25  rock wren under study in Kahurangi National Park.

He says the small insect eating birds are very difficult to track in their alpine habitat  and no dead rock wren have been found so it is too early to say what has happened to the wrens.

‘It’s not clear whether we have lost birds to heavy snow that fell in the area after the operation,1080 or predator attack and more work is required  to try to pinpoint this.”

Mike Slater says staff will continue to monitor bird and predator numbers over coming months and refine techniques where required.

He says DOC will also be stepping up other existing trapping and ground based control programmes.

“This year’s aerial 1080 phase may be over but the Battle for Our Birds continues and we are moving to strengthen our predator control networks  around the country to reinforce the gains made in recent months.”

Mike Slater says DOC staff will be taking more than a thousand new traps into the Fiordland mountains over coming weeks to protect takahē from stoats.

Trap networks in Canterbury alpine valleys are also being extended to protect whio, kiwi and the critically endangered orange-fronted parakeet.

”Protecting native species from these imported killers is a constant battle and we are continually looking at where we need to target resources.”