A landslide on Whenua Hou/Codfish has claimed the life of an adult female kākāpō named Maggie.

A landslide on Whenua Hou/Codfish has claimed the life of an adult female kākāpō named Maggie.

Kākāpō Recovery rangers found her body last week, buried deep in mud and tree debris that had cut a path down the side of a hill. Data from Maggie’s transmitter confirmed she had died on May 20.

Kākāpō Recovery manager Deidre Vercoe Scott said the date of her death coincided with a period of heavy rainfall on the island which was thought to have triggered the landslide.

“This is the first death attributed to the forces of nature since the programme began and a reminder that they're wild birds living in a wild habitat.” 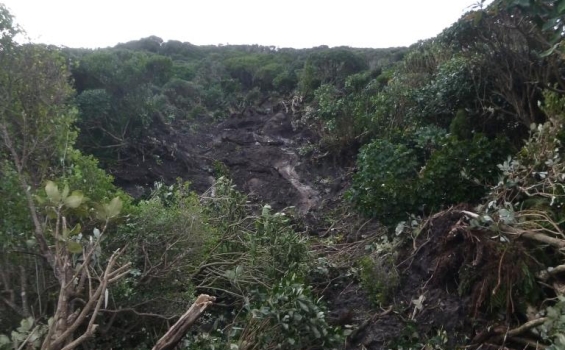 The landslide on Whenua Hou/Codfish Island

At the start of the year the kākāpō population stood at 124, but was boosted to 130 following the successful hatching of six chicks, during the first breeding season since 2011. Maggie’s death was the third during the past two months, bringing the total kākāpō population down to 127.

“Maggie was the second female to ever be found on Stewart Island in 1980, and was thought to be two years old at the time. She had four nesting attempts, although she never produced any viable eggs. To die at the age of 36 - when kākāpō potentially live more than 60 years - adds to the tragedy,” she said.

“While we’ve always been aware that we will lose some of these birds in the short term – because they’re potentially quite old – it’s a real shame to lose a female who may have years of breeding ahead of her.”

Ms Vercoe Scott said it was unlikely the numbers would grow again anytime soon, at least on Whenua Hou/Codfish Island.

“We aren’t expecting a breeding season next summer because of low fruit counts on the rimu trees there, but we’re hopeful there could be a repeat season on Hauturu o Toi/Little Barrier Island, which produced two chicks this year.”

Kākāpō Recovery was a world leading recovery programme, taking cutting edge measures to ensure the long term survival of the species, she said.

“Maggie’s DNA had already been collected and cryopreserved along with other kākāpō samples, in the hope that one day genetic technology advancements will allow it to be re-introduced into the future kākāpō population,” Ms Vercoe Scott said.