Knocking the wind out of local wasps in Ruapehu

A new local initiative to reduce the number of wasps in the Ohakune, Owhango, Raurimu, Whakapapa, National Park and Raetihi areas is about to get underway. 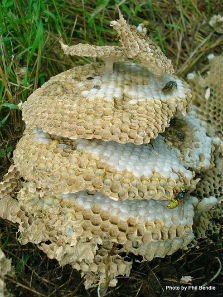 The centre of a wasp nest

A new local initiative to reduce the number of wasps in the Ohakune, Owhango, Raurimu, Whakapapa, National Park and Raetihi areas is about to get underway.

After being introduced into New Zealand, four species of social wasps are now well established in the country. All of the species – two of which are paper wasps (Polistes) and two of which are Vespula species – are regarded as pests.

Wasps have multiple impacts on the environment including on public health and public enjoyment of the outdoors, posing a threat to livestock and pets, being a risk to conservation values, by way of competition with and predation of our native fauna and they have severe economic impacts on industries such as beekeeping where they can rob beehives of honey and kill bees. Landcare Research states that wasps destroy or seriously damage 8–9% of honeybee hives in New Zealand.

Within the Tongariro District the two main types of Wasps encountered are the German wasp and the Common wasp.

In past years, the Department of Conservation has been involved in locating and controlling wasp populations that were found within the conservation estate and on private property bordering conservation land but were not heavily involved in responding to calls from the public to deal with wasp issues in other areas. Volunteers and local contractors have been the main source of wasp control in response to calls from the public up to this point.

There are two successful methods for controlling wasps. The first is to locate nests and treat them with various types of insecticides or petroleum based products. The second method is to set up bait stations where wasps come into contact with poison and then carry it back to their nests, killing the nest.

German and common wasps usually build their nests underground but can be found in trees and in roof spaces. They can travel up to 1 km to feed but will generally be found within 200 m of their nest site. The best time to locate nests is near dawn and dusk when low angle light makes seeing the wasps in flight easier. Alternatively you can put out a lure (cat food, jam etc) laced with flour which will adhere to the insect and make them easier to see. The best time to treat nests once located is the early morning or at night when the wasps are still in the nest. 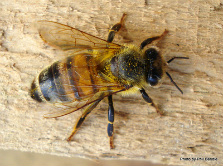 If you suspect that you may have a wasp issue in your local area, the recommended advice is 'do not to attempt to treat the nest or wasps yourself'. As part of the wasp control initiative, several contractors around the Ruapehu district have been trained to control wasps safely with the support of the Department of Conservation and the Ruapehu District Council.

If you suspect that you have a wasp issue you should contact one of the contractors below.