More than 100 local residents and conservation volunteers joined with Te Kopua Iwi at Kakepuku Mountain Historic Reserve on Saturday (6 September) to celebrate the opening of a new track and visitor facilities.

More than 100 local residents and conservation volunteers joined with Te Kopua Iwi at Kakepuku Mountain Historic Reserve near Te Awamutu on Saturday (6 September) to celebrate the opening of a new track and visitor facilities.

As well as a new lookout structure and interpretation panels at the maunga's 449-metre summit, the track includes several hundred metres of stepping and board-walking, built to protect historic earthworks that were becoming damaged by visitor impacts.

Department of Conservation services ranger Bruce Postill said Kakepuku is one the largest pre-musket pa sites in the Waikato, with the impressive earthworks constructed in an era of digging sticks and flax carriers.

"The original track to the summit was very steep and had become slippery and dangerous in parts. These new improvements will allow many more visitors and youth/school groups to come here.

"Mountain bikers can also use the track to a given point below the summit, but bikes are not permitted all the way to the summit." 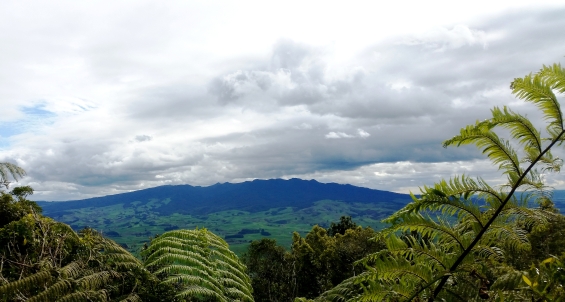 View of Mount Pirongia from the summit of Kakepuku

Bruce Postill said the project had cost $150,000 over a three-year period and Waipa District Council had also made substantial contributions to carparking, toilet facilities and track construction costs.

Speaking at the opening ceremony, Waipa District mayor Jim Mylchreest recalled how he had been a Council staff member when the opportunity arose in 1995 to purchase about 65 hectares on the slopes of Kakepuku, adjoining the historic reserve.

"At the time, the block was described rather flatteringly as 'an area of regenerating bush' but in fact most of the farmers on Council regarded it as more of a gorse and broom infested patch of weeds, and getting their approval to buy the land was not that easy," Mayor Mylchreest recalled.

Kakepuku Mountain Conservation Project spokesperson Jan Hoverd said the local community had become inspired to start its voluntary work in 1995, after becoming aware of what was being achieved with pest control in the 'kokako reserve' at Mapara, south of Te Kuiti.

"Nineteen years ago!" she recalled with surprised realisation at the amount of time and effort many locals had contributed to restoring the integrity of their own local treasure. Their sustained pest control efforts at Kakepuku had resulted in North Island robins being translocated from Pureora in 1999, while  New Zealand falcon were reintroduced two years ago.

Department of Conservation regional partnerships director Nicki Douglas thanked local iwi representatives and the local community for the support they had provided to DOC staff throughout the project. She also acknowledged the many years of hard work contributed by the Kakepuku Mountain Conservation Group, presently chaired by local farmer, David Harker.

"The Mountain Conservation Group has done a most impressive job with its possum and pest control work at Kakepuku, as well as weed control and restoration plantings."

An old volcanic cone, Kakepuku features prominently in Waikato history pre Colonial settlement. Tainui settlement in the Kakepuku area began about 1550AD, although there were probably earlier people's present - notably Ngati Kahupungapunga. Various Tainui hapu have occupied the mountain or its surrounds to the present.

The remains of four pa sites are found under forest canopy or regenerating bush so it is necessary to walk around them to appreciate their extent and features. A track passes through a fine remnant of original forest in the ancient crater and emerges at the summit itself, where magnificent views of the surrounding

The reserve is located south of Hamilton between Otorohanga and Te Awamutu, off State Highway 3.