One of three female kākāpō released onto Hauturu o Toi/Little Barrier Island in 2012 has been discovered nesting with three fertile eggs, bringing unexpected joy to the Kākāpō Recovery programme team.

One of three female kākāpō released onto Hauturu o Toi/Little Barrier Island in 2012 has been discovered nesting with three fertile eggs, bringing unexpected joy to the Kākāpō Recovery programme team.

Nine critically endangered kākāpō were transferred to Hauturu o Toi/Little Barrier Island in the Hauraki Gulf as part of a trial to determine the suitability of the island as a long term unmanaged site.

At the time Kākāpō Recovery programme manager Deidre Vercoe Scott said it could take up to 10 years before it was known whether kākāpō were able to successfully raise their chicks without support, on Hauturu o Toi.

“It’s such an exciting find. Heather has obviously settled in well and is showing confidence that’s there’s enough food about this season to raise her chicks.”

It was also a significant boost for the Kākāpō Recovery team which has been left disappointed with the high number of infertile eggs laid on Whenua Hou/Codfish Island, which is home to the main breeding population.

Of the 15 eggs found across seven nests, only three were known to be viable, with six proving infertile and one dying as an early embryo. Five eggs were still to be checked, Ms Vercoe Scott said.

“We should know either way by next week.” 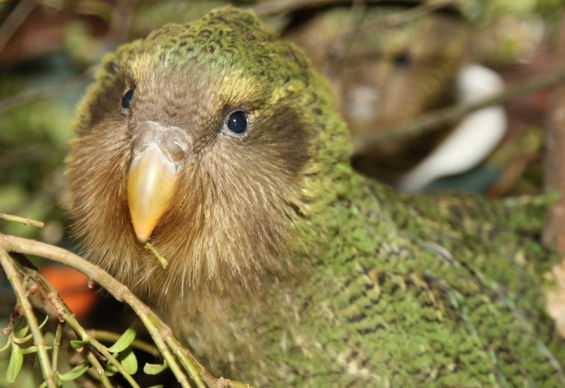 Kākāpō were first introduced there in 1982 and successfully bred during the 1980s and 1990s although they needed supplementary food. They also needed protection from the kiore (Pacific rat) and in 1999 all kākāpō were removed so the rats could be eradicated from the island.

Ms Vercoe Scott said this time, kākāpō on Hauturu o Toi weren’t being given supplementary food but all nests would be closely monitored.

“If they can raise chicks on their own, we will then know that Hauturu o Toi is a viable option for kākāpō recovery in the future,” she said.

It’s potentially a very important island to secure the survival of kākāpō. Apart from Whenua Hou/Codfish Island, it’s the only island suitable for kākāpō that’s beyond the swimming range of rats and stoats.