The Department of Conservation has today begun its Battle for our Birds pest control in Kahurangi National Park to protect native wildlife from destructive rat and stoat plagues.

The Department of Conservation has today begun its Battle for our Birds pest control in Kahurangi National Park to protect native wildlife from destructive rat and stoat plagues. 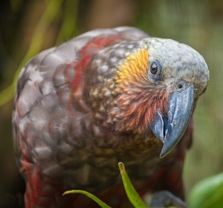 The aerial 1080 predator control will knock down rat and possum numbers. Stoats will also be reduced as a result of their eating poisoned carcasses.

The Kahurangi National Park pest control is the largest in DOC’s national Battle for our Birds predator control programme. It covers approximately 260,000 hectares in western, northern and eastern parts of the park and has been divided into five operational areas.

An operation has started today in Golden Bay, covering an area from Parapara Peak inland to Boulder Lake and including the area of the Anatoki and Stanley river catchments. The four other Kahurangi operations will start as soon as weather conditions allow.

The pest control begins with aerial application of non-toxic baits to give rats and possums a taste for the cereal baits. This encourages them to eat baits containing biodegradable 1080 pesticide that will be aerially applied at a later date, when there are favourable fine weather conditions.

DOC acting Takaka Conservation Services Manager Greg Napp said rats were at high levels in many parts of the park and without pest control would decimate native wildlife.

“Without the predator control we could lose some populations of critically endangered long-tailed bats and also whio in areas where there is no trapping in place to help protect them.

“We are timing the operations to prevent increased predator attacks on nesting native birds so more chicks survive to increase their populations.

Deer repellent will be used in 1080 cereal baits in the Cobb Valley, Peat Valley, Deep Creek, Tableland and Lower Junction area of the national park. This is at the request of the New Zealand Deerstalkers’ Association which says the Deep Creek/Tableland area is very important to its members as the core fallow deer hunting area.

In addition to its Kahurangi operations, TBfree is carrying out aerial 1080 pest control over nearly 50,000 hectares of conservation land in the Mokihinui area as part of a wider operation to protect cattle and deer herds from bovine tuberculosis (TB). This freed up DOC funding earmarked for rat control in this Mokihinui area to be used to expand the Kahurangi pest control.

“Possums are responsible for the majority of cattle and deer herd infections. The national park harbours TB-infected wild animals and pests that have a devastating effect on native wildlife if they’re not controlled,” said Mr Hickson.

Information on track and road closures in pest control areas can be obtained from DOC visitor centres and i-SITES in Buller and Nelson Tasman which will be notified shortly before the 1080 bait application operations. Signs will be placed at entrances to operational areas informing of operations taking place.

The Kahurangi National Park pest control covers two whio security sites, in the Wangapeka-Fyfe and Oparara-Ugly catchments. These are important strongholds for whio, ensuring the survival of wild populations of this nationally vulnerable species. Stoats are the main predator of whio.

The north-west South Island has New Zealand’s greatest diversity of Powelliphanta snail species. These include a number of at-risk species. The pest control will reduce rat and possum predation on the snails.

Great spotted kiwi are found in many parts of the park. The kiwi chicks are at risk from stoat attacks until about a year old when they become big enough to fend off the predators.

Localised populations of rock wren are known in the park including in the Henderson Basin and in the Grange and Morgan ranges in the Tasman Wilderness Area. These small, bustling, high country dwellers nest on the ground, making them easy targets for predators.

The Oparara and Ugly river catchments contain a good population of long-tailed bats. Predation by rats, possums and stoats is among the threats faced by these flying mammals.

The Kahurangi operation is one of 25 confirmed Battle for our Birds operations using aerially-applied 1080 over about 680,000 hectares of conservation land to knock down rising predator numbers fuelled by the unusually heavy seeding in South Island beech forests. Seven operations have been completed.

The pest control is targeted to protect the most at-risk populations of mōhua/yellowhead, kākāriki/parakeet, kiwi, whio/blue duck, kea, kākā, rock wren, giant land snails and native bats at sites across the South Island.