The Department of Conservation is concerned at recent evidence of illegal kererū /wood pigeon hunting on on Plains Road and Waimanoa Roadin Pureora Forest. 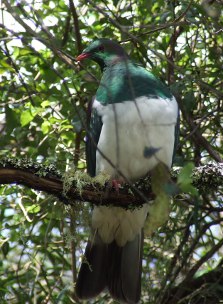 The kererū is our largest forest bird, and important for seed dispersal in the forest.

The Department of Conservation is concerned at recent evidence of illegal kererū /wood pigeon hunting on Plains Road and Waimanoa Road in Pureora Forest.

Although the kererū was traditionally hunted for its meat and feathers, hunting of the bird is now illegal. They are widespread in areas with large tracts of forest, but their numbers are in gradual decline through habitat loss, predation, competition and illegal hunting. In areas like Pureora, which have been subject to repeated pest control operations, kererū numbers appear to be recovering, which is making them a target for illegal hunters.

DOC’s conservation service manager for Pureora Dave Smith says kererū have particular importance to New Zealand’s ecology. “Our native pigeon is an important seed disperser with a bill big enough to swallow large fruit, such as those of miro, tawa and karaka. Fruit is its favourite food, and these trees and others depend on the kererū to carry their seeds to new areas of forest. If the kererū is under threat, so too are our native trees.”

If illegal hunters are caught they will be trespassed and prosecuted. Harming a kererū can result in a charge under the Wildlife Act, as it is an offence under the Act to hunt or kill a kererū. The penalties in relation to protected wildlife are up to six months jail or up to $100,000 fine plus up to an extra $5000 for each extra bird.

It is also an offence to carry shotguns or .22 calibre rifles on public conservation land, as these are the firearms most commonly used for illegal hunting. If you suspect such activities or find evidence of illegal hunting of kereru please phone the DOC hotline on 0800 DOCHOT (0800 362 468).