Date:  05 August 2014 Source:  Office of the Minister of Conservation 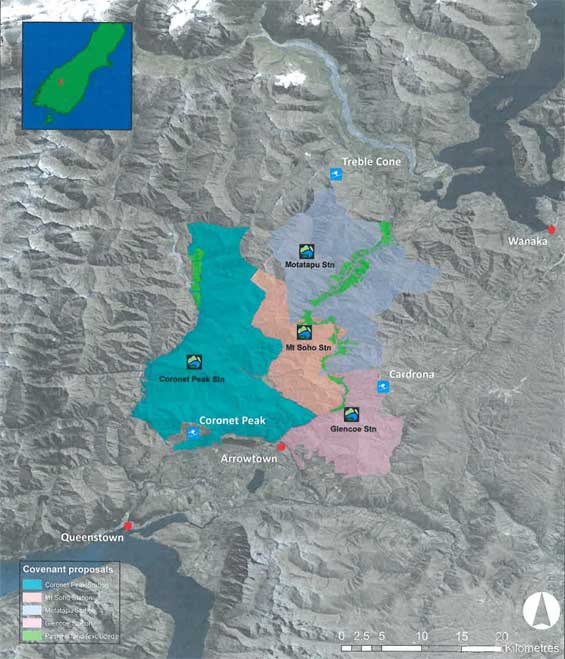 Map of area in covenant

“The permanent protection of this idyllic area of Otago that forms the backdrop for Wanaka and Arrowtown is a fantastic conservation achievement. The area between the Shotover River and Cardrona Range covering 80 per cent of the Motatapu, Soho, Glencoe and Coronet Peak Stations is equivalent to the combined size of the Abel Tasman and Paparoa National Parks. The Queen Elizabeth II National Trust secures protection for about 3500 hectares per year and so to achieve 53,000 in a single covenant is extraordinary,” Dr Smith says.

“The covenant protects a wide variety of ecosystems from wetlands, tussock grasslands, native shrub lands, alpine cushion fields and stunning mountain peaks. The area already hosts the annual Motatapu event and a multi-day tramping track from Glendhu Bay to Arrowtown. Added areas are to be opened up for public access and enjoyment as part of the agreement reached with the landowner.

“I want to acknowledge this extraordinary act of generosity by Soho Property Limited and Mr Mutt Lange. This huge conservation covenant illustrates how overseas ownership can bring benefits to New Zealand. They have invested millions in weed and pest control, fencing and over 95 per cent of the stations are now in protection. New Zealanders have greater access to this stunning country and better facilities than ever before. We should judge proposals for overseas ownership of farms on merit rather than simplistic bans that would lose positive initiatives like this.

The Queen Elizabeth II National Trust is an independent statutory organisation established in 1977 to secure long-term protection of natural and cultural features on private land. The Trust partners with landowners on open space covenants, which are legally binding protection agreements registered on the title of the land. Covenants are voluntary but once in place, they bind the current and all subsequent owners of the affected land.

“I commend the Queen Elizabeth II National Trust on securing this covenant and their work with Soho Property Limited. This is the largest covenant ever achieved, with covenants generally averaging 30 hectares. This is an important and lasting legacy for the protection of New Zealand’s heritage that will be appreciated for generations to come.”