The Department of Conservation and police are seeking help for information after a public hut in the Mavora Lakes was vandalised. The incident could lead to vehicle access to the popular, family-friendly park being restricted.

The Department of Conservation (DOC) and police are seeking help for information after a public hut in the Mavora Lakes was vandalised. The incident could lead to vehicle access to the popular, family-friendly park being restricted. 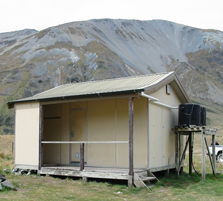 Boundary Hut before the damage

Vandals badly damaged Boundary Hut during Labour Weekend, which is estimated to cost at least $7500 to repair. Fence posts were ripped out of the ground and the iconic entrance turnstile was removed and burnt; hut decking was torn up for firewood, and food smeared throughout the hut’s interior.

Most troubling, however, was the complete destruction of the toilet and water tanks, which were all shot at close range.

Sergeant Tod Hollebon, police officer in charge in Te Anau, said that it was very disappointing to see this sort of damage in our parks.

"Back country huts are maintained to a very high standard by DOC at a considerable expense to the taxpayer. The public have a low tolerance for this sort of damage and everybody loses out.”

“Police are investigating this incident and who may have been responsible. I can assure that anyone identified will be prosecuted to the full extent of the law”, he said.

The use of a firearm in the incident raised the level of seriousness of the incident, said Sergeant Hollebon.

“To own and use a firearm is a privilege in New Zealand which will quickly be removed from those who show they are not fit to be in possession of one." 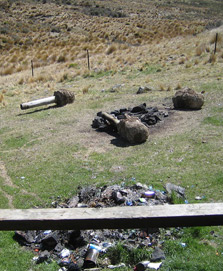 Fence posts were ripped out and burnt

DOC, which manages Mavora Lakes Park, is currently reviewing whether 4WD and vehicle access to the park will be allowed to continue.

Grant Tremain, Conservation Services Manager for Fiordland District, said it was the most extensive damage he had ever seen in 20 years of looking after huts and campsites.

“These people drove to a public hut then destroyed it, it’s disgraceful.”

“This type of vandalism affects visitors to this popular place and damages New Zealand’s reputation, and the use of firearms in this way potentially put the safety of park users at risk.”

Mavora Lakes Park is part of Te Wāhipounamu/South-West New Zealand World Heritage Area and is popular with local families and overseas visitors. It was used as a filming location for some scenes in the Lord of the Rings film series, and forms a section of the internationally acclaimed 3000km Te Araroa trail.

Police would be pleased to hear from anyone with information about this incident, and this can be done anonymously through Crime Stoppers 0800 555111.

The iconic Boundary Hut entrance turnstile, before the vandalism (left) and after (right)