A ‘ghost’ whio that hatched on the Whakapapanui Stream in Tongariro National Park two seasons ago appears to have returned to the stream near Whakapapa Village with a mate this time.

A ‘ghost’ whio that hatched on the Whakapapanui Stream in Tongariro National Park two seasons ago appears to have returned to the stream near Whakapapa Village with a mate this time.

Nicknamed the ‘ghost’ whio due to its very pale light blue grey colouring the duck was part of a clutch that hatched on the stream close to Whakapapa Village two years ago. Captured in ‘family photos’ at that time the unusual coloured duck has not been seen close to the village since.

However, Hastings resident Adam Clarke was excited to report the sighting and to get photographs of the unique ‘ghost’ blue duck while in the area during the recent school holidays  ‘whio spotting’. 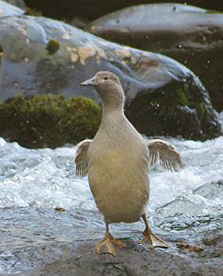 The ‘ghost’ whio due to its pale colouring

“I was excited when I spotted the duck just below the Whakapapanui Stream bridge. I had already spent  a couple of days looking  in the Turangi and Tongariro area and after an afternoon scouring streams around Whakapapa Village without any luck I was happy to finally see a pair by the Major Jones Bridge in Turangi.

“But I was just blown away when I took a chance and stopped at the Whakapapanui Bridge just above the village. I looked over the side of bridge to see this amazing specimen!

“I feel very lucky to have been in the right place at the right time,” says Adam who believes the ‘ghost’ whio is male as he heard the signature whistle.

Tongariro Senior Ranger Alison Beath says staff  were also excited to hear the ‘ghost’ whio was back in the area.

“This duck hatched below the Whakapapa Intake a couple of seasons ago, and we’ve had sporadic reports of him from the lower Whakapapanui Stream. It’s great he’s shown up again, as we weren’t sure if he had survived or not.

“His light colouring obviously hasn’t been a disadvantage yet - in fact he seems to be quite well camouflaged when he is in the white water.”

Alison says the distinctive duck had not been tagged as it was preferred to leave them alone as much as possible however it was encouraging to see he was with another duck which could mean he has found a mate and may remain in the area.

It appears the whio season has started early this year with the first ducklings reported hatched in the Tongariro Forest site earlier this month and in other areas at the start of the month.

Genesis Energy and the Department of Conservation have partnered together in a five year programme to secure the future of this unique vulnerable native bird. Operating under the name of Whio Forever this partnership is fast tracking implementation of the national Whio Recovery Plan to protect whio and increase public awareness. 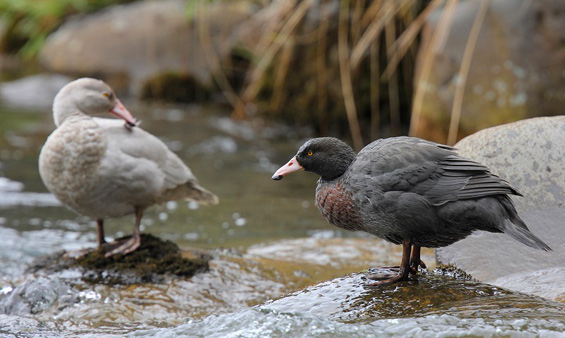