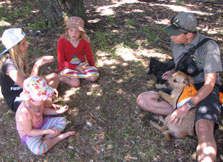 The campers were also introduced to Tyke (DOC's rodent dog) and his handler Andrew Blanshard and heard about the project's success - pest-free (no rats, stoats or mice) for twenty months.

DOC's Partnerships Ranger Helen Ough Dealy says: "This year's Fun Day continues in the tradition of DOC's annual event and finished with the usual sausage sizzle and lolly scramble. DOC and Guardians of the Bay of Islands (the community group behind the project) are already looking forward to next summer's Fun Day."

Long-time camper Brent Davies is glad the Fun Days have been reinstated. "We've been camping at Urupukapua Bay for 30 years and these family Fun Days are a highlight of our holiday. It was great seeing the little kids encouraging the big kids (adults) to take part in all the old-fashioned races."

Other activities included a duathlon (swim and run); sack races, 'hunt the rat' game and a beach scavenger hunt.

Project Island Song is a partnership between Guardians of the Bay of Islands Trust, Te Rawhiti hapu (Ngati Kuta and Patu Keha) and DOC.

If you have land on the mainland and want to find out about ways you can help restore your own land and protect the islands at the same time, contact:

The eastern Bay of Islands' mainland has its own pest-controlled buffer zone - Projects Strip, Points, Rakau and Noose and Necklace.

Established in support of Project Island Song, the Mainland Buffer Zone not only reduces the chances of reinvasion of the islands of Ipipiri by stoats and rats, but also enhances local natural biodiversity. Local people are already experiencing the benefits seeing more bellbirds and increased numbers of tui in the buffer zone area.