Twelve kākāriki or yellow-crowned parakeet released into the Abel Tasman National Park today are the first captive raised kākāriki to ever be released onto the New Zealand mainland. 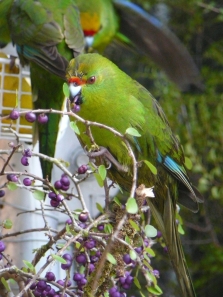 Twelve kākāriki or yellow-crowned parakeet released into the Abel Tasman National Park today are the first captive raised kākāriki to ever be released onto the New Zealand mainland.

It is also the first bird release undertaken as part of privately funded Project Janszoon and the Department of Conservation’s 30-year partnership to restore the ecology of the Abel Tasman National Park.

Releasing the kākāriki has only been possible because of extensive predator control undertaken by Project Janszoon that should provide safe habitat for the native birds in the upper reaches of the Park.  Project Janszoon Director Devon McLean says it is a very special day for the Trust.

“Two and a half years into the project we have reached a milestone where we now feel that the high altitude part of the Park is safe to start bringing native birds back.  We believe the extensive stoat trapping network we have installed has suppressed predators to the point where these kākāriki should flourish,” he says.

The twelve young kākāriki were bred at Lochmara Resort in Queen Charlotte Sound from wild adult birds caught by Project Janszoon on Long Island in the Marlborough Sounds. They were transferred to an aviary in the Abel Tasman National Park two weeks ago in order to adjust to their new environment.

Project Janszoon native parrot specialist Rosemary Vander Lee says when the birds are released from the aviary today it is hoped they will pair with the Park’s few surviving kākāriki and breed prolifically now that predators are being controlled.

“This release is perfectly timed while there is still a small relict population of kākāriki surviving in the high country and coinciding with the rollout of comprehensive and on-going pest control. Furthermore these young will be released at a time when there is a massive seeding of beech in the park and they will have a surfeit of food to tide them over winter,” she says.

DOC’s Motueka Conservation Services Manager Mark Townsend says the release celebrates the turning of the tide for native species in the Abel Tasman.

“Many bird species like mohua (yellowhead) have been lost to relentless predation over the years in the Abel Tasman, while some are just hanging in there like kaka.  With the phenomenal investment in predator control by Project Janszoon and the considerable volunteer support of the Abel Tasman Birdsong Trust this pressure is beginning to ease.  I feel privileged to witness this bird release,” he says.

Over 15,000 hectares or 70% of the Abel Tasman National Park now has a stoat trapping network.  In the event of a beech mast where abundant feed would see stoat and rat numbers surge, the trapping network will be complemented by the use of aerial 1080 pest control.

After the release it will be necessary to keep an outside feeder operating by the aviary for as long as it is used by the birds.  This initial cohort of 12 birds should be followed by many more in future years with Lochmara Resort, EcoWorld Aquarium and Tui Nature Reserve all raising kākāriki on behalf of Project Janszoon for eventual release into the Park.

Project Janszoon is a privately funded trust named after Abel “Janszoon” Tasman.  Over a 30-year time frame It will work with DOC, the Abel Tasman Birdsong Trust, the community and iwi to reduce predator numbers and weeds, restore eco-systems and re-introduce native birds, animals and plants in the Abel Tasman National Park.