Department of Conservation staff are puzzled as to how a nationally endangered kiwi of South Island origin came to be found dead in the North Island town of Otaki.

Department of Conservation staff are puzzled as to how a nationally endangered kiwi of South Island origin came to be found dead in the North Island town of Otaki. 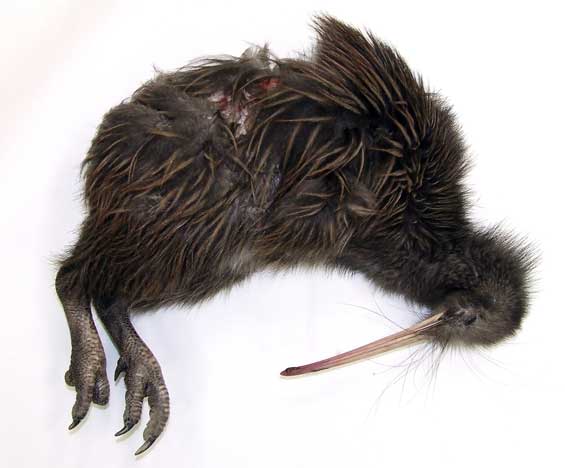 The last reported sightings of kiwi in the region were in the late 1800s in the Tararua Ranges but they were little spotted kiwi.

The female kiwi’s body was discovered last week in a hay barn by a farmer, about one kilometre from Otaki’s BP service station. It has wounds consistent with a dog attack.

DOC Technical Advisor Rogan Colbourne, who is also a member of the Kiwi Recovery Group, says he believes it is either a Stewart Island or Fiordland Tokoeka, which someone must have brought to Otaki.

DNA tests are being carried out to determine its exact origin. The results will be known in about a fortnight.

Rogan Colbourne suspects someone was keeping the kiwi as a pet as it was in good condition, weighing just over 3 kg. The kiwi is also missing a toe, which indicates it was probably caught in a trap some time ago.

“It is irresponsible for people to take protected species from the wild. This female kiwi should have been living in the wild contributing to the breeding population,” he says.

Anyone who has information about how this kiwi ended up in the Otaki area should contact their local DOC office.

Kiwi are protected species and anyone found breaching the Wildlife Act could face penalties of up to two years in prison or up to $100,000 fine.